So you’re in the market for a new desktop or laptop computer and trying to determine whether you should purchase an Apple Mac or some kind of Microsoft Windows-based PC. Deciding on which one to choose really comes down to which type of user experience will best suit your needs. 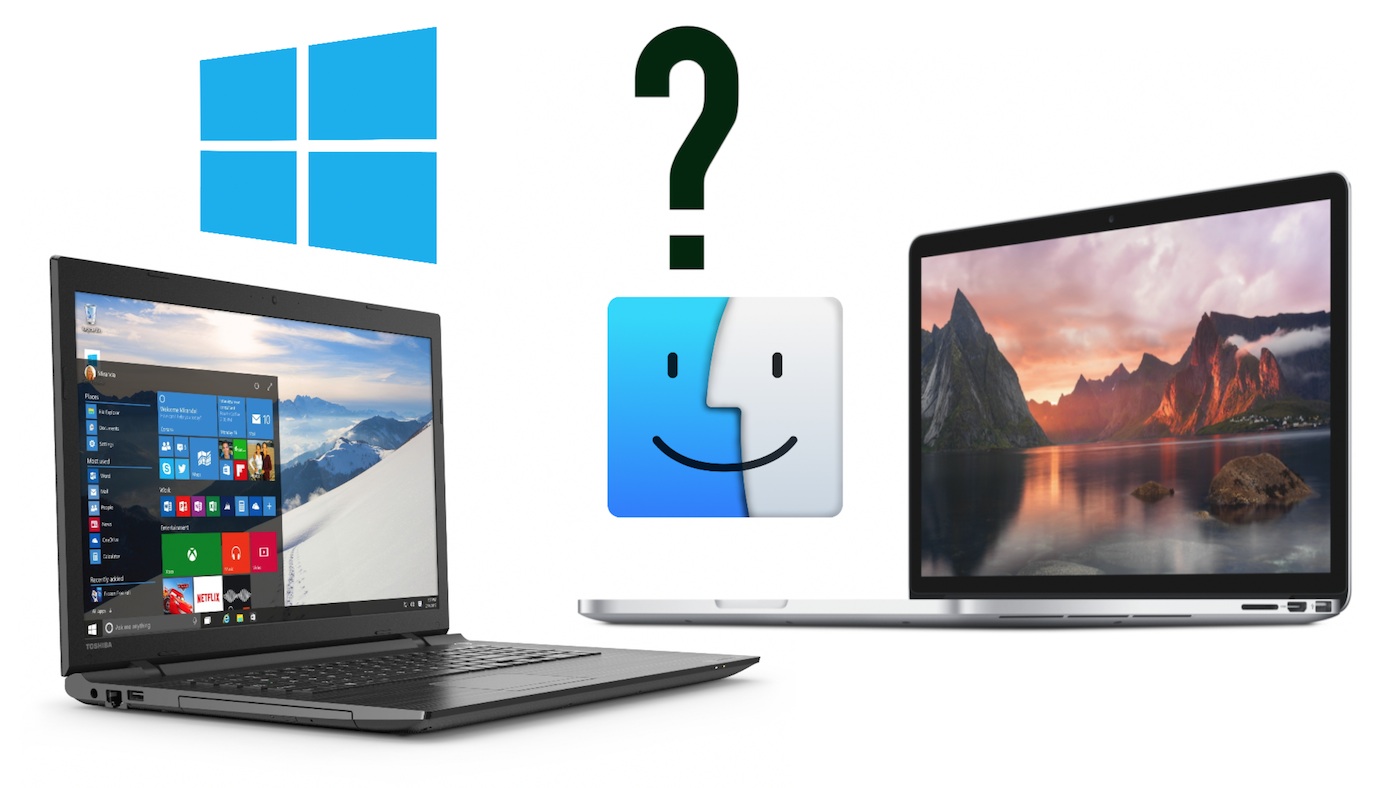 Don’t let the Mac Vs PC fanboy wars influence your opinion, that conflict is almost as old as consumer computing itself. It’s irrelevant and sectarian at best. In the past both Apple and Microsoft engaged in petty and juvenile attacks on each other but nowadays they enjoy a more productive, almost collaborative relationship. Both operating systems are also much closer now in terms of overall quality and capabilities.

While Microsoft has begun producing their own hardware in recent years with their Surface line of tablets, Windows PCs are mostly produced by a wide range of different manufacturers. This means that with a Windows 10 PC, you get enormous variety in the design and build quality of your computer. Windows aims to be a one-size fits all solution that attempts to cater to users at the budget end of the market all the way up to the expensive high-end gaming-centric user.

Specifications, components, upgrade potential, performance, battery life, design aesthetics, reliability and durability, all of these aspects vary greatly across the Windows PC spectrum. Windows computers are all rounder machines. Windows 10 is a fine operating system that boasts unparalleled compatibility with hardware, software and peripherals thanks to a large third-party developer base. These developers are attracted to the large user base of the OS.

Windows 10 PCs can be versatile and with ideal specifications, they can take on the most performance intensive tasks, from graphically intensive gaming through to video editing and 3D design and rendering. The library of available software for the PC is overwhelming and considering most people own a PC, when something goes wrong with your machine, you’re likely to find the solution to it fairly easily.

Apple Macs, which run OS X have a much smaller third-party developer base due the diminutive user base of the platform. As a result, software for Macs, while certainly plentiful is in much shorter supply than for Windows PCs. OS X is a far more simplified system with much of the technical aspects hidden away from the user. This has some positive and negative effects. It makes for a more seamless, intuitive and graphically appealing experience but when something goes wrong or crashes, there are less technical controls available for troubleshooting.

I should point out however that since Windows 8, Microsoft has begun to copy Apple’s approach here and strip away everything from onscreen boot-up loading information to setup and configuration screens. Tech savvy users are less encouraged to go near the registry or a command prompt due to Microsoft’s attempt to neuter and control significantly more and more of the backend components of the OS. This is an unfortunate sign of the times in my opinion because computing is beginning to cater to the lowest common denominator.

While both Windows and OS X are reliable systems, arguably more reliable than they’ve ever been, the Mac tends to just edge Windows in the stability stakes. It’s less prone to crashing, system lockups and Kernel panics, which are the Mac version of a Blue Screen of death, happen much less frequently in OS X. Apple has managed to create a completely self-sufficient productivity ecosystem around the Mac with their own purpose-built software application suites.

While Microsoft must rely on third-parties to develop productivity software, Apple designs and builds most of the really important and frequently used applications themselves. These software packages include the iLife Suite, professional video and audio applications like Final Cut Pro X, Logic Pro X, Motion 5, Compressor 4 and Main Stage 3. Because Apple builds these applications, pro users benefit from having unrivalled customer support for all of these apps. This is aided further by the fact that Apple Macs make use Apple controlled hardware. OS X only runs on Mac computers so Apple knows all of the components within your machine, they can therefore diagnose system and hardware conflicts more simply than their Windows-based counterparts.

Should you buy a Mac or a PC: Upgrade Potential

This closely controlled hardware and software relationship may have some benefits in simplifying and optimising OS X to run well and reliably, but it does have an unfortunate drawback. Apple has made it so that Macs are severely limited in their upgrade potential. Some Macs in their lineup do offer the capability to upgrade RAM and hard drives but that’s about as good as it gets. Apple does not allow users to build their own certified Mac computer and they don’t produce an upgradable tower-based Mac machine. Windows on the other hand is rated to run on all manner of hardware and many Windows desktops provide significant upgrade possibilities for power supplies, RAM, processors, GPUs and other components.

Of course it would be naive to suggest that Apple limits upgrade potential of its Macs purely to guarantee a high quality user experience. While this is partially true, it’s also to increase planned obsolescence by forcing users to replace their ageing Macs more frequently.

Nevertheless, in my experience technical headaches are less likely on the Mac and peace of mind is a little easier to achieve. As if to complicate this debate further, it’s important to remember that Macs can also run Windows either natively through the preinstalled Bootcamp application or via emulation. Macs also install and run Windows very efficiently because Apple ensures the user benefits from a simple installation wizard and a concise driver database. So in effect, a Mac gives you the best of both worlds.

OS X also provides users with less intrusive software updates than in Windows and a far more convenient backup solution in Time Machine. You can even migrate from an older Mac in a much easier fashion thanks to the Mac migration solution or by using Time Machine. This means it’s possible to literally reconstruct the exact state of your original Mac on your new one. This is not quite so easy to do in Windows and usually requires the help of a third-party app.

Should you buy a Mac or a PC: Value for Money

However Macs aren’t cheap and Windows PCs offer much greater bang for the buck. Although Macs do provide much greater resell value when it comes time to sell them. There are two reasons why Macs tend to be more expensive, the first one is because Apple makes use of premium materials in its hardware designs and secondly because it builds all-in-ones like the iMac or Mac Mini. These types of computers are not cheap to construct and therefore offer less powerful specs than similarly-priced Windows-based tower desktops.

This is where the notorious Apple Tax comes into play. Apple tends to aim its notebook computers at the premium luxury market like the ultrabook MacBook Air or the super thin 12-inch retina MacBook. While I firmly believe Macs are better for the creative professional industry such as film and television post-production studios; there’s no doubting that Apple also targets the image obsessed and fashion conscious users out there.

Some PC manufacturers have tried the same approach with premium ultrabooks also, but for the most part they target the average consumer and the business sector. Consequently the fancy frills are dispensed with and practicality becomes a higher priority. As I’ve previously mentioned, the variation in hardware is also a reason why PCs offer a wider range of hardware interpretations and capabilities. For example, Windows 8 and 10 natively support touchscreens and tablet computers while OS X El Capitan still doesn’t support touch input at all.

For many users, Windows will be their OS of choice purely due to the plethora of games available for it. Windows is without doubt the best gaming platform out there and the Mac just cannot even remotely compete with it. Windows will likely always be the better choice for the average user, while the Mac will remain an alternative, delivering a different type of user experience.

Whether you select a Mac or a PC as your next computer, I can guarantee that you will benefit from unique strengths specific to the platform of your choice.