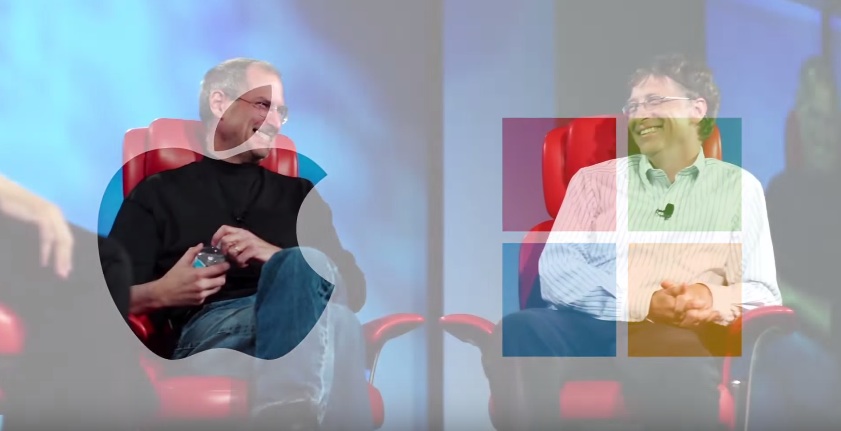 Microsoft’s Windows has maintained its 90% dominance over the market, conceding little to Apple’s OS X over the years. Realising in the late 90s that they couldn’t hope to overturn Microsoft’s enormous lead, Apple focused on remarketing the Mac to a niche user base of creative types who ‘think different’. The truth is Macs and PCs aren’t all that different, although as the more popular OS, Windows tended to fall pray to more viruses and as Microsoft were purely a software company, they couldn’t exert the same control over the hardware their OS would run on like Apple.

What was most interesting to me following the ‘Hey Siri’ keynote event on September 9th was how far the relationship between Microsoft and Apple has come. The once great rivals seem to be slowly burying the hatchet together and moving forward as partners.

Under new CEO Satya Nadella, Microsoft has matured greatly and become a far more agile and streamlined organisation. They’ve recently changed their business model when it comes to Windows, turning Windows 10 into an annual utility and office into a subscription service. They formed alliances with the likes of Dropbox and are no longer at odds with Salesforce.

So when Apple invited Kirk Koenigsbauer of Microsoft’s Office division on stage during their iPhone 6s keynote to talk about Office on the iPad Pro, it was reminiscent of Steve Jobs inviting Bill Gates to talk on stage at Apple’s 1997 press event. That infamous occasion in which Microsoft announced they would invest in Apple and offer Internet explorer as a default browser. That day Jobs stated that the battle between Microsoft and Apple could no longer be a zero sum game, Apple had to do a good job.

That rational and pragmatic thinking was on full display at the Hey Siri event.

In the Steve Ballmer days, he probably would have balked at the iPad Pro and bigged up the Surface. But Nadella seems beyond this pettiness. Although Office has been on iOS and OS X for a while, the fact that Apple would invite Microsoft on stage into their private sanctum, just shows how their relationship has become more collaborative than competitive. The adversarial edge is gone. Phil Schiller introduced Koenigsbauer of Microsoft saying “These guys know productivity”.

Microsoft demonstrated how they are in full support of Apple’s new iPad Pro. Who cares if it sells more or less than the Surface Pro 3 or 4? Microsoft get the benefit of having their Office software on what will no doubt be another super successful consumer product in the form of the iPad Pro and Apple get the benefit of having a high quality productivity suite to offer their users. No wonder they’re now giving iWork away for free.

Apple has learned from Microsoft’s Surface Pro 3 that they needed to develop a larger iPad with a stylus pen and so they did. Microsoft learned that with Windows 10 not yet fully adopted in the mobile market and Google’s Android a serious competitor, they can eek out more market share for their Office software suite by working closely with Apple.

After all the cat fighting down the years, it appears as that Microsoft and Apple’s long term destinies are entwined and when you think about it, they kind of always have been.

1 thought on “Have Microsoft & Apple finally buried the hatchet?”