How Apple Destroyed the Mac Mini 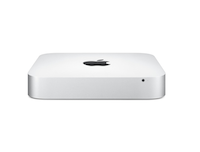 Apple’s Mac Mini has gone through a few major design alternations during the course of its lifetime, but Apple have turned what was once a compelling entry-level machine and ideal PC-to-Mac switching option into a bit of a crippled joke.

It was designed as a more affordable alternative computer for new Mac users, offering only the machine itself, no mouse, keyboard or display is included like get with an iMac for example.

So you obviously had to already own those essential peripherals, consequently the price was a good deal lower than Apple’s other Mac computers. The Mini itself has always had fairly light weight to mid-level specifications and has generally been priced at around $599 and most recently $499.

The Mac Mini has historically offered the user the ability to make upgrades to the hard drive storage and RAM and it’s also served as an ideal media centre machine for use underneath a television.

When Apple learned of how their users were using the Mac Mini in this way, they redesigned it to better meet their needs. In 2010 it was completely overhauled with a unibody design. It was now slimmer and more optimised for media centre usage, particularly because it offered a DVD drive, a remote control, HDMI output and OS X included Front Row, a media centre software application.

So I was completely bemused four years ago when I reviewed the 2011 edition of the Mac Mini. Not only had Apple removed the DVD drive, which was always going to happen eventually, but they also jettisoned Front Row from OS X. This meant that there really wasn’t much incentive left to use the Mac Mini as a media centre PC in your living room anymore. It seemed like an odd an unnecessary decision.

Nevertheless, the Mac Mini remained a popular low cost Mac for switchers and those in the the Mac Mini community. Fast forward to October of 2014 and Apple once again makes another baffling and unpopular decision. Although they dropped the price back to $499 for the entry-level Mac Mini, they also neutered the machine significantly. Firstly they removed all of the quad-core Intel processors, instead opting for dual-core chips only, thus forcing more people to consider upgrading to a more expensive iMac machine, and secondly they completely stripped the machine of its upgrade capability.

The back panel, which was once so easily removed and allowed the user to upgrade the RAM, had been sealed shut. The RAM is now soldered to the motherboard and cannot be changed. So you’ve got to make sure you purchase the Mac Mini with all the RAM you need for its entire lifetime of usage. This is of course done for two greedy money grabbing reasons. Number 1: To promote further consumerism by making the Mac Mini obsolete faster and number 2, because everyone knows Apple’s RAM prices were extortionate.

People would traditionally purchase RAM from much more affordable third parties rather than pay Apple’s crazy prices. Apple has decided to kill the competition and force users to have to pony up the extra cash by purchasing their Mac Mini with all the RAM they’ll need to begin with. How come only Microsoft and Google get hit with anticompetitive business practice complaints when Apple are clearly creating their own monopoly? Well I guess it could be argued they have the right to do whatever they want with their own ecosystem, but regardless, it means that the Mac Mini is a much weaker machine as a result and the biggest loser in all of this is the end user.

My advice, if you really want a Mac Mini, buy a second hand one on eBay from before Apple butchered its upgrade potential.