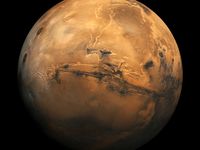 Mars One, that inspiring and hopeful Red Planet mission to take us to our nearest planetary neighbour apparently received 200,000 applicants from across the globe. They were vetted down to just a few and the mission intends to generate the $6 billion dollars it needs by turning the whole thing into an exploitative reality TV dog and pony show. Ah, is there a more glamorous way to explore the universe than voyeuristically watching a crew of unqualified newbie astronauts undertake an almost certain suicide mission across the stars and seeing them get bumped off one by one by radiation poisoning, hitting a hard vacuum and burning up in the planet’s atmosphere? Thankfully I’m glad to say such a horrific television freak show will never occur because, Mars One is a scam!

According my compatriot Dr Joseph Roche, professor at Trinity College’s School of Education here in Dublin, Mars One has no plan, no money and has kept all participants in the dark. Just like the average Kickstarter campaign then. It advertised that over 200,000 people applied when in fact only 2,761 were mad enough to sign up. Joseph became suspicious about the whole process when when he found out some people had bought their way into the mission. Also people were being encouraged to donate their appearance fees back into Mars One. This seemed very odd considering such appearance fees could only be a drop in the ocean compared to the billions of dollars they needed for the mission. Hmmm, sounds like  a pyramid scheme.

As if you needed anymore proof, Joseph has not only never met anyone involved in Mars One in person, although he did have a 10 minute Skype chat with one of them. Candidates got through each round of the vetting process by gaining ranking points by how many donations they made and how many T-Shirts, hoodies and posters they bought. AKA merchandise. Unsurprisingly the TV deal fell through.

Anyway well done to Joseph for finally getting out and exposing Mars One. So the lesson for all my subscribers today is if someone ever offers you a “free” mission to Mars, don’t get in back of Space Van!

1 thought on “Mars One sounds like a Pyramid Scheme”