How I’ve Become Set in My Tech Ways 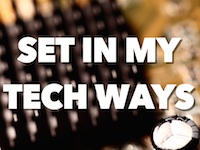 I think I’ve become a little bit set in my tech ways and I’m not complaining. It’s just something that I’ve started to realise. People reach a phase in their life where they begin to stop adapting to and adopting new ideas or trends. Whether that’s giving up on listening to new music or losing interest in modern pop culture entirely. Not following the latest TV shows would be another example.

You also establish routines in your daily life that you become almost institutionalised in to a certain extent. With technology constantly advancing, I find that YouTube is making it clear that I have become intentionally stuck in a certain mindset and way of behaving.

There’s probably a reason my channel isn’t more popular than it is and it’s because I’ve remained invested in traditional technologies. I actually have no problem with this fact, I have a niche following and am humbled and greatly appreciative of the subscribers I have. But there’s no doubt that my channel would be far bigger if I cared more for the things I don’t actually care about.

I can’t get my head around a lot of the things that younger YouTubers go nuts about. For example, at Christmas my nephew showed me some of the videos he watches on YouTube. It was the first time I heard of PewDiePie and for the life of me I couldn’t understand what the hell that was all about. YouTubers who unbox things like Nerd block and Loot Crate boxes I just don’t understand. They couldn’t have less to do with technology. But people go crazy for this stuff. I can’t even rustle up the smallest amount of enthusiasm.

I’m not saying there’s anything wrong with this kind of content, and if it’s your kind of thing, go crazy. But it’s not for me and more and more I’m finding myself deciding what I will and won’t accept or tolerate. Everyone is going to reach this stage in their life at some point. When you start maturing as person you begin to make more decisions that define you. The root of the word decision is the latin Cise, which literally means to cut. To make a decision is to literally cut away any other possible action. In my case a few years ago, it was to delete my personal Facebook account. The facile, ego centric and time wasting nature of Facebook didn’t interest me. Now I just have a business Facebook page for Computing Forever. I also got rid of my smartphone, downgrading to a Nokia 113. This has given me a lot more free time and I’m a lot less distracted and more focused. I’m also much less stressed. But this was perhaps the biggest choice in my tech life because it has cut me off from a very large arena in the tech world.

I’m completely out of touch from many of the things that are occupying the minds of a huge majority of my generation and the younger generation. There’s mobile games, apps and social media networks and other communications methods I have no idea of. I’ve never used Spotify, Instagram, Snapchat, Swarm, Vine, Tumbler, Pinterest, Feedly, Pocket. They have no place in my life and the great thing is, I don’t care. I mean think about Vine, 6 second sharable videos on a loop. How is that a thing?

I like traditional computing. Computing designed for geeks and not every single average consumer out there, which is what I feel social media and the post-PC era is designed for.

So guys, tell me if there’s any situations in which you’ve become set in your Tech ways or indeed become a bit more closed or conservative in your personal life. I don’t think it’s a problem frankly. I think it takes some balls to stand apart from the herd and say, “nah, that’s not my thing”.