Apple Mac Mini Vs iMac 2015: Which Should You Buy? 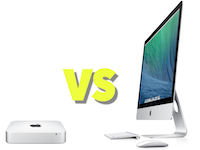 Apple’s Mac lineup features three desktop computers, the Mac Mini, iMac and Mac Pro, the latter of which is too powerful and expensive for most consumer’s needs. So in this article, let’s compare the Mac Mini and the iMac and see which one makes for the most worthwhile and cost effective solution. For the purposes of this comparison, we’ll stick primarily with the entry-level editions of both machines in terms of specs.

The Mac Mini has recently been bastardised by Apple, it might start at $499 or €519, but it’s now devoid of expansion capability of any kind, no RAM or hard drive upgrades are possible and the processors are dual-core only. It’s also known as a BYODKM machine. Bring your own display, keyboard and mouse. It’s literally just the desktop unit only, nothing else is included in the box. Although this helps to drive the price down, it does make it a little tricky to directly compare these two machines because the iMac is an all-in-one computer. Not only do you get a nice 21.5-inch or 27-inch display included, but you also get a mouse and keyboard.

The Mac Mini has many shortcomings and as I said in my review back in October, I can’t recommend it. But regardless of what I say, it will still sell and plenty of people will buy it. The question is, does its low entry price help to make it a cost effective alternative to the iMac for those who already own a mouse, keyboard and display, are on a very tight budget and are hard set on buying a Mac computer?

For those current Mac Mini users who wish to simply replace their existing computer with a brand Mac Mini, then this situation becomes a little easier. They already have the necessary accessories and the initial outlay of €519 isn’t much to ask. Except that the entry level Mac Mini is grossly underpowered. It starts with a 1.4GHz dual-core processor, 4GB of RAM and a 500GB hard drive. The iMac is basically the same in terms of specs but with double the RAM, a 21.5-inch display and a mouse and keyboard but it starts from €1,129 or $1,099. I really believe you should double the RAM on the Mac Mini from 4GB to 8GB, thus increasing the price to €619. 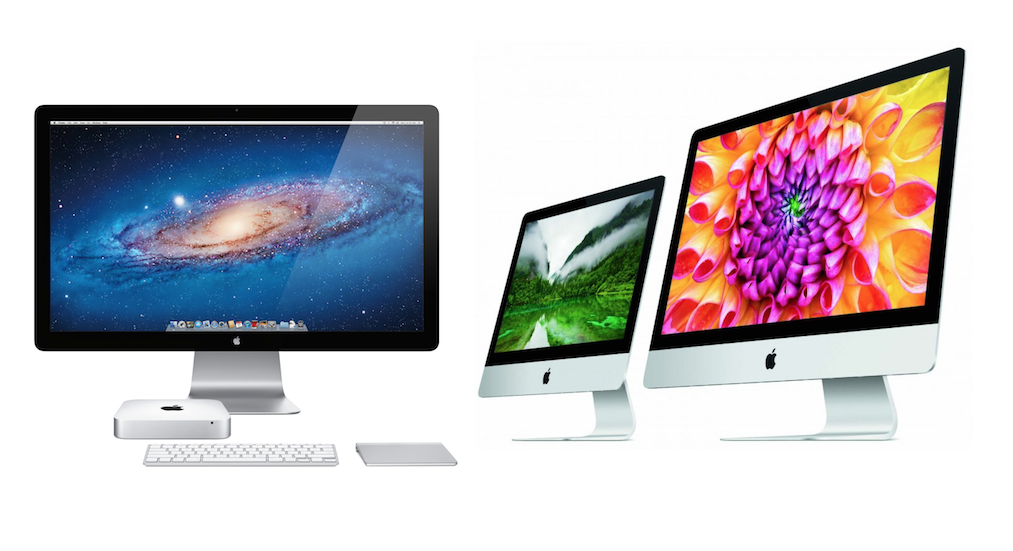 Now if you’re without a display, keyboard and mouse it’s best not to buy these from Apple. Apple’s cheapest wired mouse costs €49, as does their keyboard. Their 27-inch Thunderbolt display costs over a thousand euros, so it makes no sense to spend all that money just to get a Mac Mini, you might as well buy an iMac. But if you are willing to buy the display, keyboard and mouse elsewhere, then you stand to make some considerable savings.

You could pick up this cheap Samsung 24-inch 1080p monitor for €153.31 or if you want to go ultra cheap, you could buy this HKC unknown brand 18.5-inch display with a resolution of just 1360 x 768, VGA, DVI LED monitor for €87. Cheap and nasty but probably effective for many casual consumers. Slap in this bargain basement bin wired Logitech desktop mouse and keyboard combo for €13.88 and you’ve got yourself a Mac Mini computer with everything you need for €720, or €620 if you opt for just the 4GB of RAM. That stands up pretty well when compared to the 21.5-inch iMac entry level model, except for the display of course. Apple’s displays are of much higher quality than some cheapo unbranded monitor.

So it seems that the Mac Mini beats the iMac at the entry-level end of the scale, saving you up to €400 or a similar amount in US dollars. But you can’t deny that the iMac massively reduces cable mess and clutter with its wireless keyboard and mouse and built-in display. You desk will be much cleaner, assuming that’s important to you and it may not be. But the iMac wins overall because the more money you spend speccing up these computers, increasing the RAM and storage options etc, the more the iMac becomes a far better choice.

Not only does the iMac provide vastly more configuration options, its specs improve dramatically the more you spend, whereas the Mac Mini only goes so far. The iMac allows you to upgrade the RAM too. Also the 27-inch 5K iMac, which admittedly costs €2,699 allows you to upgrade not only the RAM, but the processor also. iMacs offer quad-core CPUs and discrete graphics processors from Nvidia and AMD, no such luck for the Mac Mini.

Personally I think spending anymore than €700 – €800 or dollars on the Mac Mini is not really justifiable. And buying a very low-end iMac is a bit of a waste of time when you consider how much more bang for the buck you get with an OEM Windows PC or building your own machine. But if you’re dead set on buying a Mac, remember the mantra of ‘buy cheap and buy twice’. Don’t go ultra cheap because you’ll end up spending more money in the long run as you’ll be replacing the computer every 2 – 3 years instead of every 4, 5 or even 6 years.

The high end 21.5-inch iMac, with its quad-core Core i5 CPU, Nvidia GPU and 8GB of RAM stands up well at €1,549 and the high-end 27-inch non retina iMac configured with 16GB of RAM, 3TB fusion drive and a 3.5GHz quad-core Core i7 processor for €2,649 will serve many power users as a more affordable alternative to the Mac Pro, providing many years of use. What many people have to consider also is that Macs hold up extremely well in a very important area, resell value. When the time comes for you to buy a new Mac and part with your old one, you can sell it online and it’ll make you a reasonable amount of money. I bought my 2008 iMac for €2600 and sold in 2013 for €550. For a computer to be still worth that amount after 5 years is fantastic.