27-inch iMac 5K Retina Display Review: It’s Not Worth it 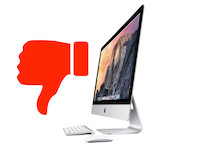 27-inch iMac 5K Retina Display Review: It’s Not Worth it

The 27-inch iMac with 5K Retina Display was introduced in October of 2014. It’s main selling point is its incredible high resolution display at a pixel density of 218 PPI, a total of 14.7 million pixels and a resolution of 5120 x 2880. That’s twice the resolution of the regular 27-inch iMac.

The specs of this iMac 5K feature a Core i5 processor at 3.5GHz, 8GB of RAM, 1TB Fusion drive and an AMD Radeon R9 M290X with 2GB of video memory and I have to wonder if that’s a slight bottleneck for a display of this resolution.

For house keeping purposes, let’s run through the I/O and other standard features. The iMac 5K has a front facing FaceTime camera, 4 USB 3.0 ports, 2 ThunderBolt 2.0 ports, an Ethernet port, SD card slot and an audio port for headphones or speakers. It’s quite a thin machine as you can see, with the entire computer neatly tucked away in the back of the display. A wireless bluetooth mouse and keyboard come as standard. OS X Yosemite comes preinstalled.

The main selling point is the display of course, but is all this worth the €2,699 price tag? Well for starters for the first time ever, you can truly have an extraordinarily large desktop area. At maximum settings, there’s a massive amount of screen real estate here, which is perfect for having a wide array of applications running. Trouble is, this can’t be good for your eyes, everything is simply way too small. This isn’t practical at all. You really need to drop the settings down to something more manageable. You’d need a microscope to see everything.

The typography is amazing, icons, HD and 4K videos and high quality images look great. Really super sharp when viewed at best settings. Basically if you own a Retina MacBook Pro, then you know actually what to expect from this machine’s display. Web pages look great because the text is crystal clear and beautifully rendered.

This iMac 5K will meet most users needs, be it light to moderate productivity apps, which come included in Yosemite, Pages, numbers and Keynote are all free now, however, more extreme usage may not be so great. There has been numerous reports that the 5K display is a bit if a resource hog and can slow down video editing export and render times in Final Cut Pro X by 14%. Moreover, the AMD Radeon R9 M290X GPU runs a little too hot for my liking. Gaming performance is acceptable although you have to be aware that not all games will run at such high resolutions and you may need to drop the resolution down before you fire up certain games.

Although I didn’t encounter any truly egregious performance issues, the fact that this uses a 5K display means that there has to be a certain amount of GPU horsepower lost in the process. In other words, an iMac with the exact same specs but without a Retina display would likely perform that little bit better than one with a 5K display. Consequently, beyond the novelty of owning such a machine, I can’t really recommend it, when you could buy a 27-inch iMac with more RAM, a better GPU, faster processor and more hard drive space than this one.

There are very few applications on the market that are designed to take advantage of such a high res display, at least right now. So this machine is a bit ahead of its time. For €20 less, you could buy a high end non-retina 27-inch iMac with a Core i7 3.5GHz processor, 16GB of RAM, a 3TB SATA drive and an Nvidia Geforce GTX 775M graphics processor that has 2GB of video memory. So what if it doesn’t have the pixel density, it’s not like you’ll notice it all the time. After about 20 minutes the retina display effect kind of wears of anyway. Are you going to be anymore productive because you’ve got a 5K iMac? With slightly compromised performance it could be argued you’ll be less productive.

There’s no doubt that 5K displays will be the future, and I won’t deny that when you consider Dell’s standalone 5K display is roughly the same price as this iMac 5K, this suddenly becomes a bargain. I mean you get a gorgeous 5K display and a Mac computer all-in-one for €2,699. That’s fantastic, at least on paper. However, in the interests of bang for the buck and performance, if you want a 27-inch iMac that will deliver a smooth, efficient and fully optimised user experience with no compromises, then buy a non-retina iMac.

2 thoughts on “27-inch iMac 5K Retina Display Review: It’s Not Worth it”