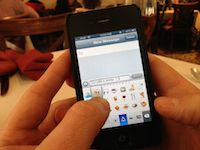 Language constantly evolves over long periods of time, but technology accelerates that change dramatically. The English Language is being changed at a far faster rate than ever before thanks to the new communications technologies we’ve developed via the Internet. In this article I’m going to discuss how technology has changed language in our lifetime.

When Email was first introduced in the 90s it quickly began to replace letter writing and introduced a raft of new conventions such as abbreviations like IMO (In my opinion), TTYL (Talk to you later) and FYI (For your information). It also repurposed the word attachment from the real world and established the idea that words in upper case mean the person is shouting.

Texting has without doubt been one of the biggest contributors to contemporary language. Small Screen sizes have necessitated the creation of a new kind of short hand, brought us emoticons and a raft of new acronyms.

Some words have been reappropriated and given new meaning. Words like ‘Friended’ and ‘Unfriended’, Social media has also changed the context associated with the words ‘Like’ and ‘Viral’.

The word Buzzword is in fact a Buzzword in itself and we can all think of lots of examples of new phrases, some of them eye wateringly irritating, that have permeated language. These include “Big Data”, “Synergy”, “Dynamic”, “Value Proposition”, “Infographic”, “Selfie” and “Totes ma goats tres amaze balls!”

Social media speech tends to shorten sentences also, bringing us the Portmanteau or word merge. I’m sure you’ve seen lots of examples, while some of these words seem somewhat useful, they are a little absurd sounding. Like “Blaudience”, which is your blog audience. “Mockumentary”, which is Mock and documentary, “Staycation”, which is fairly obviously stay and vacation, That aggravating schoolyard phrase “Frenemy”, which is friend and enemy and “Cosplay”, which is costume and play stuck together.

Language has to move on and will continue to change from generation to generation, but it’s clear that modern technologies are advancing language and indeed culture far faster in our modern digital age. Whether that brings positives or negatives is up to history to decide. Researchers have known for some time that the advent of spell checkers in word processing software has been contributing to the death of many words and phrases like “How do you do?”, “Goodbye”, “Fortnight”, “Marvellous”,”Dirty” and “rambunctious” these are just some examples. But I’m very interested in your thoughts. Do you find that you have changed the way you communicate? Let me know in the comments below.