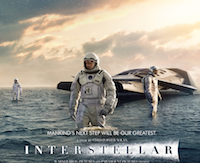 Interstellar, one of the best space opera movies you’ll see in years. But that’s not saying much because most Hollywood movies are piss poor anyway.

A crop blight has turned humanity into a failing agrarian society. Even though it takes about an hour for the film to tell us that. Literally nothing happens in the first hour of the movie and I gave considerable thought to walking out of the cinema but instead decided to close my eyes and catch up on some sleep, but then the movie actually started in the second hour so I decided to open my eyes again. Matthew McConaughey’s character of Joseph Cooper is a farmer with two children, a son named Tom and a daughter named Murphy.

The daughter goes by Murph and she believes there’s a ghost in her room. Turns out this ghost is sending binary messages through gravitational waves through some dust on the floor and some books falling off a shelf, I know, it sounds ridiculous. They discover coordinates to a secret NASA base. And don’t seem to act all that surprised. They believe that aliens are sending messages to help humanity through gravity waves. Michael Caine’s character is a scientist in NASA with a plan to send a space ship into a newly discovered wormhole that leads to a solar system in another galaxy with three potentially habitable planets for human society.

They’ve already sent a few ships in before. There are two plans, plan A, which is to solve a gravity theory that would allow them to send massive space ships filled with large human populations into space and plan b, to recolonise these new worlds with new human life grown from embryos.

What’s totally ridiculous is that NASA demand that Cooper pilot the ship that will take them there. I mean, didn’t they already have a pilot for the mission?

Cooper agrees much to the devastation of his young daughter and general apathy of his son and father. He’s accompanied on his mission by three other human’s Doyle, Romilly and Amelia Brand and two of the oddest looking Robot’s you’ve ever seen. Their design suggests they were inspired by Minecraft.

To the movie’s credit, there’s some great attention to scientific detail here. From time dilation, gravity, silence in space, right down to the spherical shape of a wormhole. When they finally reach the new solar system in a breathtaking cinematic sequence, they being their investigation on the first planet. Trouble with these planets is that they all orbit a blackhole. Now this is where the scientific accuracy goes out the window. We can’t even get close to a blackhole without being torn to shreds by it, but hey, I forgive sound in space and universal space time in Star Trek, so I’ll let that pass.

After landing on the shallow ocean world of Miller, the crew begin investigating the wreckage of a probe that had been sent there. The thing is, this entire scene is just an excuse to have an action sequence. Anne Hathaway’s character is a cliched overly emotional and irrational type we’ve seen in a dozen other similar films, she refuses to head back to the ship when an enormous tidal wave is about to kill her. She ends up jeopardising the mission and the character of Doyle is killed in the process and they narrowly escape. This is where you start to realise that this is just another one of those movies where the crew get bumped off one-by-one and you know that only the male and female leads will survive because their just so good looking!

Due to time dilation, all the running around on this watery planet has caused 23 years to pass by the time they return to their space ship. Romilly is there and he’s aged those full 23 years, and despite a couple of long sleeps, he amazingly hasn’t lost his marbles and gone postal. While this is all going on, Cooper’s kids are getting older. His daughter has joined NASA and she’s now the same age as Cooper and his son Tom has kids of his own.

Next the crew decide to head for Mann’s Planet, an icy barren world where they’ve gotten some positive signals about the place from the Character of Dr. Mann played by Matt Damon. The planet is named after him. Dr. Mann tells them that they have all the ingredients for a successful human colony right there and they begin investigating. Trouble is, Dr. Mann is another Hollywood cliche, you know the kind that goes nutty in space and tries to kill everyone? He attacks Cooper and even breaks his visor and exposes his face and hand to the environment. 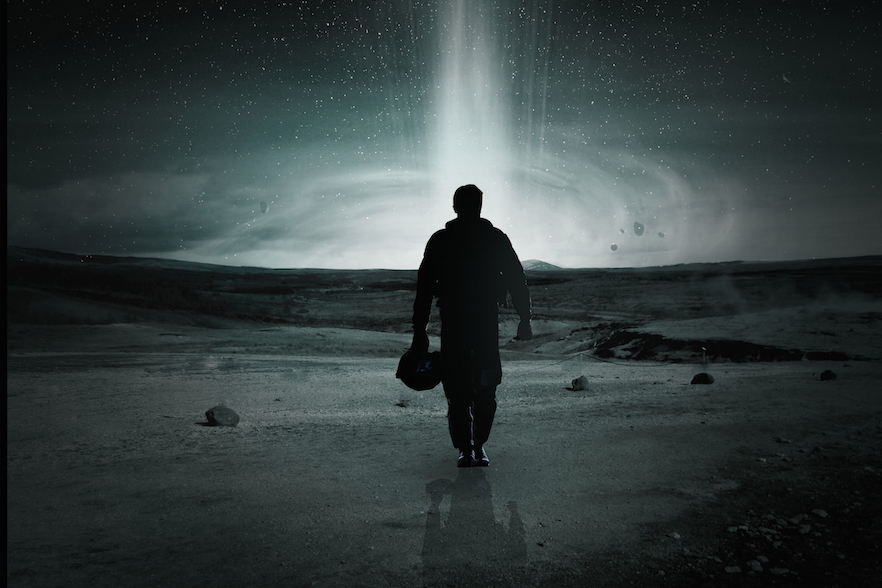 As Cooper struggles, it becomes clear that this planet has an earth like pressure and only the requirement for oxygen masks. So why they’re walking around in pressurised space suits is beyond me. Mann’s plan is to get back to the Endurance, steal the ship and head home to Earth. He booby traps one of his robots and kills Romilly because enlightened scientists can turn into psychopathic murderers at the drop of a hat. He also severely damages the ship when trying to dock with it and is killed in the process.

This is where a couple of major plot holes in Interstellar can be witnessed. Apparently he’d been lying to them all along. Feeding them false data and telling them how the planet was a great place to establish a colony when in fact it’s worthless and uninhabitable. How they couldn’t determine this from orbital scans is beyond me. Moreover, how come the crew can receive high quality detailed recordings from their friends and families back home, but the original lazarus expeditions to these planets couldn’t send back detailed telemetry and data on the conditions of the planets?

The second plot hole in Interstellar is Dr. Mann’s character himself. From a practical standpoint, it would have made more sense to say, “Hey guys, sorry I lied to you to get your attention. This planet is worthless, I just wanted to be rescued. Can I come back to Earth with you guys?” They’d probably have forgiven him and taken him with them. There was no need for another arbitrary conflict here, but every Hollywood movie needs a “Bad Guy”.

A third plot hole in Interstellar that seems like a major logic problem is the very issue of this solar system being majorly affected by time dilation. Surely it would make more sense to simply terraform Mars with all the technology they have? 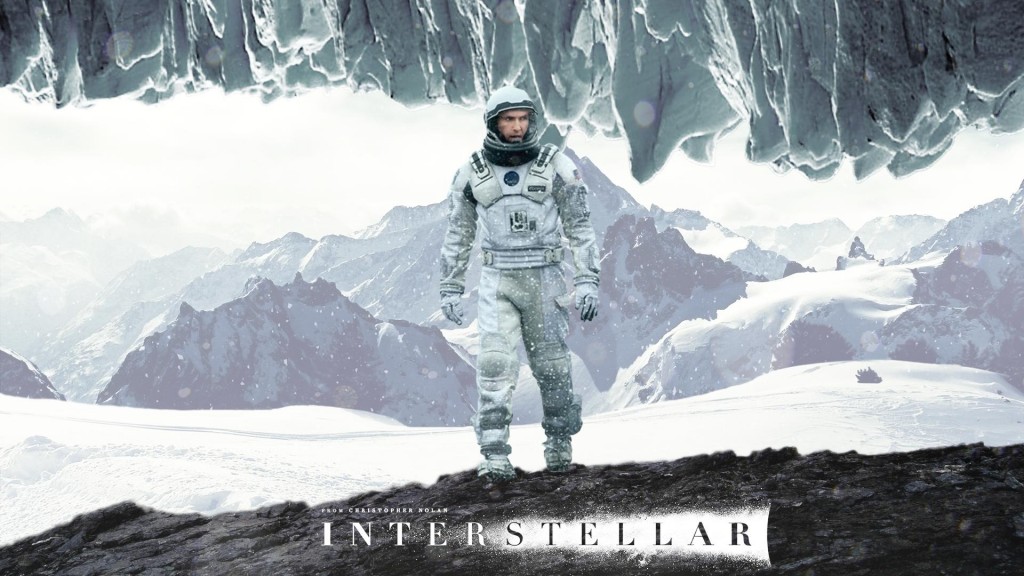 Oddly, the word terraforming is never mentioned in the movie, presumably that was the ultimate objective of NASA when it came to these three new worlds but it’s not 100% clear.

So now only Copper and Amelia Brand remain and they decide to perform the requisite, dangerous slingshot around the black hole sun in order to get to the final planet named Edmunds. Cooper has to sacrifice himself in order to do this and jettisons his ship into the black hole, allowing Amelia Brand to fly off towards Edmunds.

The film enters its otherworldly-2001-a-Space-Odyssey-Monolith phase, when Cooper enters the fifth dimension tesseract. Here he can traverse space and time and drop in on his daughter’s childhood. As I predicted from the very beginning of the film and any hardcore sci-fi fans who’ve witnessed a time paradox before will have twigged earlier, Cooper is Murph’s ghost and he’s been the one sending the gravitational anomalies that led them to find NASA in the first place. 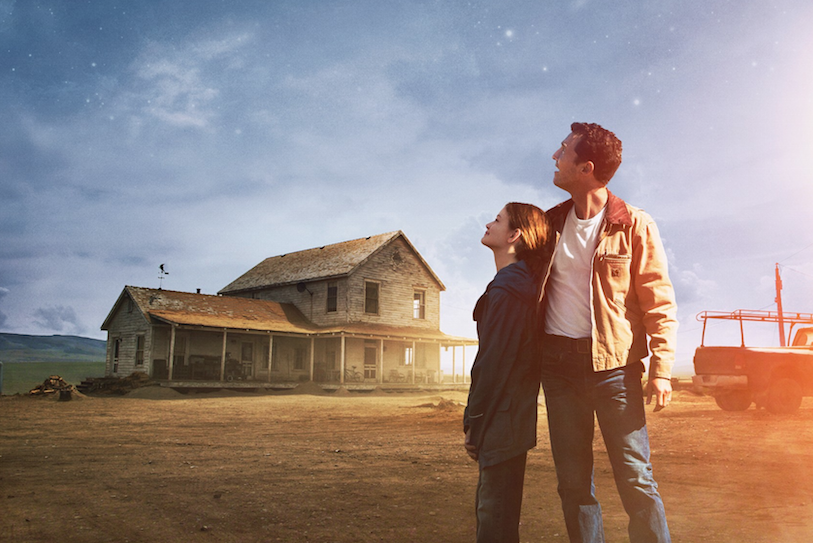 Turns out future humans built this dimension and use it to help humanity in the past. He assists her with developing the gravitational theory to save humanity and then wakes up in a hospital on a large space station. Humanity is saved and are now on their way to Edmunds presumably, although it’s never actually stated for certain. The question marks around how the hell billions of humans are going to be transported on mass to another world and where the ships came from to do so is also never actually explained.

Anyway, Cooper has an emotional farewell to his daughter who is now much older then he is in physical years. She’s dying in her hospital bed and doesn’t have long left. There’s some nice call backs to the beginning of the movie and then Cooper heads off after about 2 minutes to meet Ameilia Brand on Edmunds. The thing is he seems to have forgotten something, like I don’t know…HIS SON!! He never even asks whether Tom is still alive or not, he just forgets about him, moreover, wouldn’t Cooper want to get to know his grandchildren at all?

Nope I guess not. Interstellar seems littered with these unforgivable storytelling mitakes.

The film can be praised for its solid adherence to scientific accuracy but the old tropes of arbitrary action scenes to kill off characters one-by-one, astronauts that go crazy in space and want to kill people and characters with little to know emotional self-control, despite supposedly being the greatest examples of human specimens is just tiring. Another example of sloppy writing  in Interstellar is the character of Tom, at one point during the film there is a major evacuation going on. 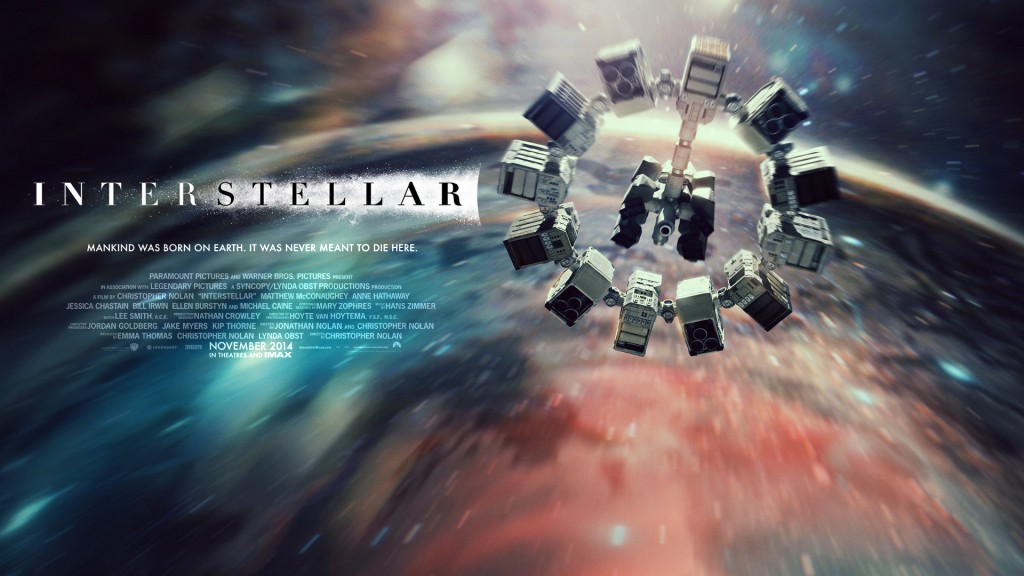 Everyone is leaving to go to some nearby shelter and escape the dust clouds. Tom refuses to allow his kids to go and instead wishes to stay on the farm to presumably, watch them all die? Makes no sense whatsoever. Murph’s unnamed co-worker, played by Topher Grace tries to convince him in one of those impassioned speeches where the audiences knows from a mile off he’s going to get punched in the face by the end of his rant. I can’t count how many times I’ve seen this happen in Hollywood movies and TV shows. One character gets up in another character’s angry face, spews some truth at them and ends their last sentence with a word or phrase that pushes the listener over the edge and results in a swift right hook to the jaw. It goes somewhere along the lines of “blah, blah, blah, blah, blah, blah, blah, Your Father!!!” WHACK!!! And then the angry character punches the speaker square in the face.

Interstellar had some genuine potential as an intense and thought provoking highbrow Sci-Fi movie. It had the opportunity to try to explore a hopeful vision of the future in the face of global annihilation, and serve as a cautionary warning about environmental and ecological damage. But it doesn’t quite get their from an emotional stand point. At a time when global warming is a hot button issue, Interstellar decides to leave the underlining reason for the global disaster up to the audience’ imagination.

Let me know your thoughts on Christopher Nolan’s Interstellar. For video content, check out Computing Forever on YouTube.