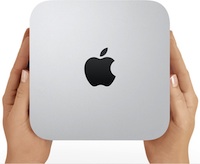 This month, Apple updated not only their iMac lineup with a new 27-inch 5K display edition, but also a new Mac Mini. The Mac Mini has been long over due for a refresh and many people felt it was probably going to be retired. Thankfully Apple didn’t do this. Instead they updated the Mac Mini, admittedly it’s an internals refresh only as the chassis design and dimensions remains the same.

The new Mac Mini sports the addition of 2 ThunderBolt 2 ports, fourth generation core series processors, Intel HD 5000 and Iris series graphics, HDMI video output and SSD storage. Apple have even introduced a lower-end model with a dual-core 1.4GHz Core i5, 4GB of RAM and 500 GB hard drive for the reduced price of €519. That’s a price drop of €100 over the previous generation Mac Mini. However, despite these much sought after updates, the Mac Mini has been seriously handicapped.

Apple has removed the easy access panel at the bottom of the machine, which allowed the user to easily upgrade the RAM themselves. The RAM is now soldered to the motherboard, which means that you had better buy sufficient RAM for your purposes because you won’t be able to upgrade it later. This is a typical inexplicable Apple decision that was totally unnecessary. I’ve never been able to fathom these kinds of immensely unpopular decisions. The aforementioned entry-level €519 Mac Mini is now a total waste of time because it it only comes with 4GB of RAM, which is pitiful by today’s standards.

Users and Apple fans across the web have openly criticised Apple’s decision here, which is needlessly restrictive and will no doubt hurt their sales. It is my recommendation that you purchase a high end version of the previous generation Mac Mini, which provided the opportunity to upgrade the RAM. This is such a tremendous shame, as a cheaper and more powerful Mac Mini with the ability to upgrade system memory could have been a great success for Apple and very much appreciated by their users.