The History of the Macintosh Computer

Apple’s Macintosh Computer line has become a unique brand all of its own and one that survives and thrives even to this day. But where did it all begin? This is the History of the Macintosh computer. Back in January 24th of 1984 Apple released the first Macintosh Computer, which was later renamed the Macintosh 128KB. It was the first mass market personal computer to feature a graphical user interface with a mouse and keyboard. 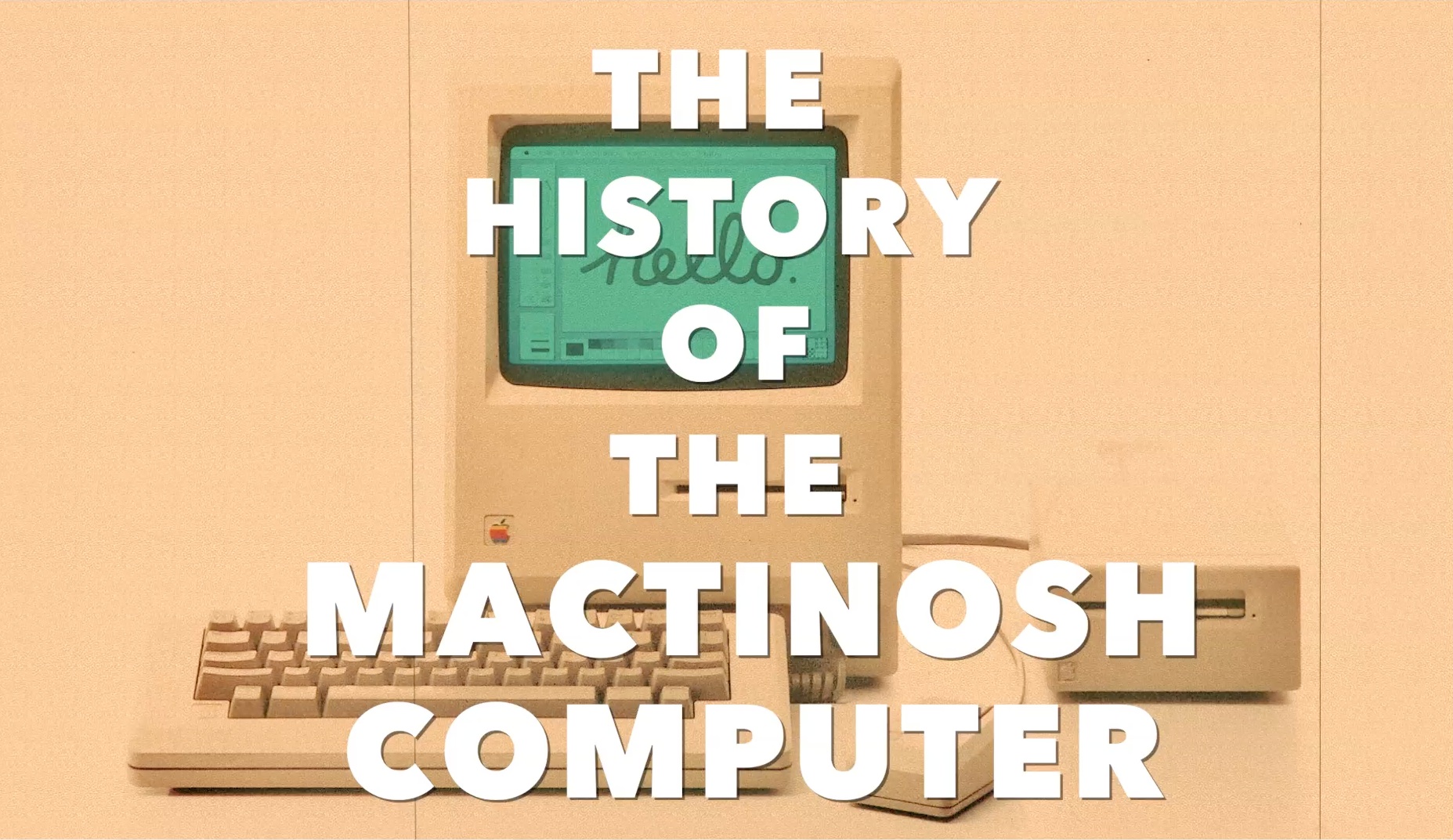 It featured a 9-inch CRT display at a resolution of 512 x 342 and included a floppy disk drive, the processor was the Motorola 68000 at 7.8MHz and Ran System 1.0 as its OS but would support operating systems all the way up to 3.2.

Despite its strong feature set and gorgeous design, for the time, it was surpassed by the more popular IBM personal computer because the Macintosh was simply too expensive. And that was largely how Apple lost it’s market share to Wintel-based systems in the 90s. This machine cost $5,595 in today’s money. In 1985 Microsoft word came to the Mac.

The Macintosh 512K was next up, which as the name suggested, quadrupled the RAM of the Mac, making it more suitable as a business computer. It could run System 4.1 Believe it or not, support ended for this machine as late as 1998.

The Macintosh Plus was released in 1986 and was a big step up with 1MB of RAM, which could be expanded to 4MB. It also included an external SCSI peripheral bus, it cost $2600 at the time and ran System 7 OS.

The Macintosh SE was released in 1987, SE stood for System Expansion.  It was the first Mac with an internal drive bay, either 20MB or 40MB.

The Macintosh Portable would be the first battery-powered portable Mac computer, paving the way for the future of the laptop. This was released in 1989 and although it was met with much buzz, it suffered poor sales because it cost $6,500. It had a state of the art black and white active matrix LCD screen but the price pretty much killed it.

In February of 1993, Apple unveiled their first colour compact Mac computer, the Mac Color Classic. It had a 10-inch Sony Trinitron color display.

The PowerPC era had begun in 1992 and would last until 2006 but with Steve Jobs’ return to Apple in 1997, everything changed. The company began an unprecedented era of innovation that arguably continues to today. The 1998 iMac G3 was the first iMac computer ever made, initially a fairly slow machine designed for web browsing, the iMac would become Apple’s flagship desktop machine. Numerous laptops followed also including the iBook with its familiar clamshell design.

The iMac G4 would be the most iconic and creative designs ever realised by Apple and remains a collectors item for many. With its desk lamp look it came in three different screen sizes, 15, 17, and 20-inches.

The very famous but largely unsuccessful G4 Cube was introduced in 2001, which while elegant would be simply too expensive and would later be replaced by the much cheaper and more capable Mac Mini. The Mini would also receive its own design changes over the years.

Throughout all of the hardware guises of the Mac, Mac OS would remain the corner stone operating system. Mac OS X was released in March of 2001 and has now had 11 iterations, Puma, Cheeta, Jaguar, Panther, Tiger, Leopard, Snow Leopard, Lion, Mountain Lion, Mavericks and Yosemite.

In 2006 the iMac was updated to feature a plastic polycarbonate design and a move to Intel processors, this also coincided with the release of the White Macbook, Apple’s new flagship laptop, which featured the same polycarbonate-style chassis.

The Mac Pro would be introduced in 2006 also and would become the most powerful mac in the lineup. A fully upgradable powerhouse workstation. Then in 2013 it would change dramatically into the coffee machine trash can design it is now.

The PowerBook series would be replaced by the MacBook Pro lineup and the MacBook Air, Apple’s first attempt at an Ultrabook would begin shipping in 2008.

The Mac continues to be refined throughout the years, it’s become a brand associated with luxury and premium quality. And although I don’t think the same level of quality control exists in Apple products as there was a few years ago, relatively speaking they still stack up very well against their Windows-based counterparts.