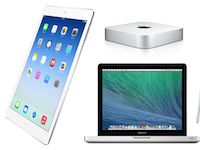 According to the latest reports, Apple could be about to enter a hectic schedule of product releases in the coming months. Not only do we expect the new iPhone 6 in two different sizes to be unveiled sometime in September, but it’s some of the other products I’m most interested in.

First up it’s the iPad Air 2, which many believe will be released before the holiday season, sometime around November. The new iPad Mini is also long over due and despite what many analysts are saying, I suspect they’ll be released at the same time.

So what can we expect from the new iPad Air 2? Well an A8 processor, a better camera and a slimmer and lighter chassis are all fairly obvious updates. But it’s the addition of 2GB of RAM, which will be most welcome, plus the introduction of split screen capability for multitasking, which is now present on Android devices and has been part of Windows 8 for some time now.

The Mac Mini is also long over due to be updated and according to current rumours, Apple may be looking to significantly boost the specs of their smallest desktop computer. It is believed that they may power it with a Core i7 4790 processor and 16GB of RAM. A November 20th release date has been put forward also.

Next up, The MacBook Pro lineup has just one non-retina model remaining, it’s also the only Mac laptop that still has a DVD superdrive. Well current rumours suggest Apple wish to redesign this 13-inch laptop and make it a little sleeker, much like the retina model and this may mean it is about to jettison its super drive. This would mean of course that the only significant difference between it and the retina 13-inch model would be the lack of a retina display. Hopefully the price at €1149 remains an enticing incentive for people.

Stay tuned for more rumours on other Apple products including the iWatch, iMac and iPhone 6.