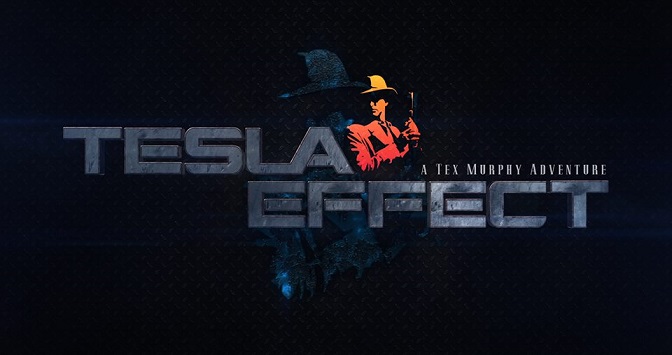 Tex Murphy Tesla Effect, the sixth game in the Tex Murphy game franchise has officially launched on GOG.com and Steam. The Interactive movie and point-and-click action adventure game began life as a Kickstarter campaign back in 2012 when I had the opportunity to interview Chris Jones (AKA Tex Murphy himself). The game brings together live action video and film noir storytelling with beautifully rendered 3D environments, immersive gameplay, rich narrative pathing and head scratching puzzles.

Tesla Effect is the first Tex Murphy title since Overseer in 1998, which was left on a cliffhanger. Loyal Tex fans have hung in for a resolution for 16 years now, after numerous attempts to bring the franchise back to life, the folks at Big Finish Games have finally resurrected Tex.

Tex Murphy is an old-style 1920s private detective, the game is set in post-apocalyptic New San Francisco in the year 2050. Previous well known Tex Murphy Adventures have included Under a Killing Moon, The Pandora Directive and the aforementioned Overseer. All games are available on GOG.com for download and are fully compatible with Windows XP, Vista, 7 and 8 thanks to built-in DOS Box emulation.

The synopsis is as follows:

Tex Murphy wakes up – disoriented and head pounding – on the fire escape outside his office atop the Ritz Hotel. Another typical morning for the last of the old-school detectives. Except it isn’t. What starts out as the worst hangover in history becomes a baffling nightmare: something – or someone – has erased Tex’s memory of the past seven years. Motivated by lost love, revenge and the world’s strongest coffee blend, Tex must retrace his own steps into a maze of unsolved murders, hidden agendas and lost technologies of Nikola Tesla. Only by solving the mysteries of his past can Tex hope to regain his memory in time to restore what’s been lost and stop a terrifying future.

The game is priced at just €19.99 and Big Finish Games have promised fans that the game will remain DRM Free for now and always.