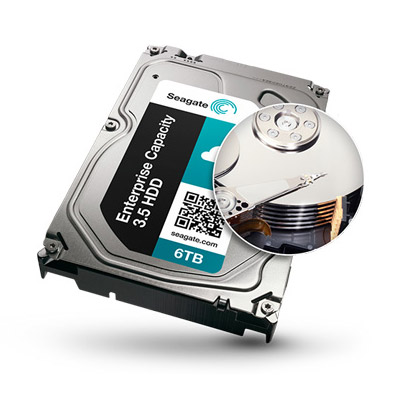 Seagate has announced a new 6TB hard drive, which they are referring to as “The World’s fastest”. The Seagate Enterprise Capacity 3.5 HDD v4 boasts an operating speed of 7,200 RPM, which is 25% quicker than similar hard drives from Seagate’s competitors.

It offers 12 Gb/s SAS connectivity or SATA 6 Gb/S depending on the model you decide to go for. The drive fits into a regular 3.5-inch bay incidentally and Seagate claim that the Seagate Enterprise Capacity 3.5 HDD v4 gives users the “highest density storage per square foot in the industry”.

In addition, this drive is designed for reliability to function in an enterprise and cloud data centre-type environment. As a result, the drive failure rate has a mean time of 1.4 million hours, which is about 160 years and is also designed for serious usage with heavy workloads such as 550 TB per year as the standard benchmark.

The Seagate Enterprise Capacity 3.5 HDD v4 comes with a five year limited warranty and the ability to self-encrypt ansi instantly erase when required.

There is no pricing information just yet however, but the drive is expected to go on sale from the usual places some time in the spring. Hopefully a consumer-grade edition will be released with some competitive pricing in the not so distant future and incorporate some of this drive’s technologies.