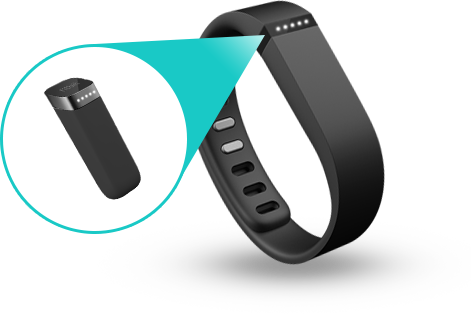 The Fitbit Flex is a fitness wristband that tracks your movement throughout the day, measures your calorie count and monitors your sleep.

The device itself is housed inside a rubber wristband and as you can see, it’s very tiny. A really nice touch was the fact that Fitbit include two wristbands to cater for varying wrist sizes. I was really impressed by the inclusion of a smaller one suitable for women and children. You really don’t have to worry about ever having to take the Flex off, except when charging of course, because it’s fully waterproof, so you can wear it in the shower or while swimming.

Charging is fairly easy, simply pop the tracker out of the wristband and place it inside the included USB charging cable. The battery lasts about 5 days.

The Fitbit Flex monitors calories, distance, steps and sleep quality through the use of a series of sensors and motors. Inside there’s a MEMS 3-axis accelerometer and there’s also a vibration motor to allow you to set alarms or notify you when goals are achieved.

The Fitbit Flex can sync with your smartphone or your desktop computer through the use of an included bluetooth dongle and from there, the installed application allows you to access the online dashboard where you can view your stats for the past 24 hour period.

The device works well enough, syncing proved reliable, the design is unobtrusive and you’d barely know it was on your wrist at all. However there are two areas I have to criticise, firstly, the tracking of your steps is not always accurate. For example, sometimes just moving your arm around can register false steps, which is obviously a bit of an issue. So the recorded steps on your dashboard seem more like an estimate, now you can go into the dashboard and remove those erroneous steps but that just takes up time and becomes a bit annoying.

Secondly, one of the main reasons I was excited about using the Fitbit Flex was being able to track my sleep. Entering sleep mode is achieved by tapping the device twice in quick succession, the LED lights blink a few times and then begin monitoring the quality of your sleep before you go to bed. Tapping twice again in the morning when you wake exists sleep mode. Seems straight forward enough except if you accidentally tap it during the day, which confuses the device. Whatsmore, you still have to manually enter the time you were asleep for in the dashboard, which is really a bit silly because how can you tell exactly what time you drifted off at?

What is really needed here is a device that can detect when you’ve fallen asleep through changes in your pulse rate or heart rate, without you having to do anything, no manual user intervention. Often times the sleep recording facility on the dashboard was so wildly inaccurate it told me I’d been asleep for 32 hours. What’s that about? I don’t remember falling into a coma before.

Anyway, when it did work reasonably well, it did an okay job at detecting the amount of times I awoke during the night, but sadly this seems like a weak area of the Fitbit Flex.

The Dashboard itself is really the most important aspect of the device, while it’s at times a little too elaborate to the point of being clunky, it does provide enormous customisation options for those who are interested in setting goals and analysing data. The counting of your steps is still mostly pretty accurate despite the occasional mistake as I mentioned and you can register details about your diet and examine your most active times of the day. You can also connect Fitbit to your social networks and keep up with other flex users, sharing your data with them.

To be honest, this seems more like a useful tool for fitness fanatics and those looking to keep fit rather than those trying to lose weight. The LED lights don’t tell you much about what’s going on and much of its features would feel more suited to being part of a smart watch. That said, the Fitbit Flex boasts an excellent design, thanks to it discrete wristband and diminutive size. For the price of €99 the Fitbit Flex will serve as an excellent fitness companion to those looking to more accurately measure their workout progress and boost their general activity during the day. If for nothing else, devices like this do help to encourage people to get out from their desk at lunch time and take a walk. After all, every step counts when it comes to fitness.