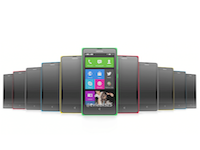 Nokia are due to unveil their new Android smartphone at the Mobile World Congress, which takes place between the 24th and 27th of February. Thus far, Nokia has focused on delivering handsets running Microsoft’s Windows Phone mobile operating system, however their new device is expected to run Google’s latest edition of Android.

The smartphone is codenamed ‘Normandy’ and will be known as the “Nokia X”, will run what is referred to as a’forked’ version of Android. This means it will incorporate Microsoft services into its version of the OS, which will include a separate app store, however it will continue to offer much of the old familiar Android apps users know. The UI will resemble Windows Phone.

In the leaked press renders and images, it is clear that the Nokia X could be mistaken for a Windows Phone handset, with a colourful tiled-UI displaying shortcuts and apps. The device won’t exactly set the world on fire in terms of specs as this is aimed at the lower end of the smartphone market. The hardware will include 512MB of RAM and just 4GB of internal storage, so be prepared to purchase an additional SD card to expansion.