Poll: What Version of Android are you running? 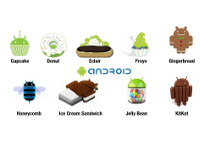 The OS fragmentation of Android is a very well known issue that doesn’t seem to have gone away. Although for the most part it has been reduced, Google’s failure to adequately work closely enough with manufacturers and with many device makers opting to bolt on their own proprietary UIs, has led to a considerable disparity between the versions of Android being used.

As it stands, the latest version of Android, 4.4 KitKat is languishing far behind its predecessors with just 1.1% of the Android market. This slow adoption of Google’s latest and greatest mobile operating system places it behind 2010’s 2.2 Froyo, which holds 1.6% of the Android pie. Surprisingly Honeycomb is far behind all other versions with just 0.1%. The most popular version of Android is Jelly Bean, with versions 4.1, 4.2 and 4.3 taking up a combined 54% of the user base. Despite being over 3 years old, 2.3.3 Gingerbread continues hold a firm 24.1% with the once popular Ice Cream Sandwich now holding a steady 18.6%.

Android KitKat was released on October 31st of 2013 and as you can see, despite Google’s attempt to unify the Android experience, its penetration is very low indeed. The reason for this is largely due to the system requirements for the OS and the fact that unlike similar OS upgrades from Microsoft and Apple, many Android users are forced to remain restricted by the limitations imposed by manufacturers.

Many device makers continue to slap on their own custom skins and UIs thus creating compatibility issues and preventing users from upgrading. The truth is, most users want stock Android out of the box. It seems as if Android Fragmentation is not going to be fully rectified with 4.4 KitKat just yet, especially when the only devices currently on the market that support it are the Nexus 5, Nexus 7 and certain editions of the HTC One, Motorola Moto X and Samsung Galaxy S4.

So in today’s Computing Forever Tech Poll, I’m asking you, what version of Android are you currently running?

4 thoughts on “Poll: What Version of Android are you running?”