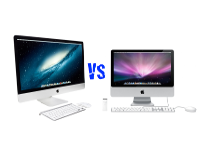 It’s time for me to demonstrate just how far we’ve come in terms of computing in the last few years. I’m going to put my old 24-inch 2008 Core 2 Duo iMac up against my new 27-inch Core i7 iMac and see just how much quicker the latter is over the former.

I’m going to test boot-up times, file transfer speeds, video editing rendering and output and of course, Geek Bench. My old 24-inch iMac has served me well but it’s simply no longer up to modern standards and hasn’t been for a few years now. The specs are as follows. It has a 2.8Ghz Core 2 Duo, 4GB of DDR2 RAM, a 750GB SATA Hard drive and the Nvidia Geforce 8800GS as it’s GPU.

The new 27-inch iMac is actually the late 2012 iMac but with specs almost maxed out, which means in terms of power, it’s on par with the current 2013 iMac so this really is a battle between a machine from several generations ago and current standards.

So let’s get started. I shall begin with the customary boot test, which thanks to the fusion drive, the 27-inch iMac will duly win at a canter. Clocking in at 14.52 seconds when compared to the 2008 iMac’s 50.45 seconds, the disparity is significant.

Next up is the latest version of Geekbench, version 3.13. Now this is just the basic 32-bit version because I haven’t paid for the premium 64-bit one but we’ll still get a good sense of where the machines are relative to each other, It is a tough ask for the older iMac with a score of just 2770 for multi-core processes, whereas the single-core came in at just 1551. The new one, blows it out of the water with a multi-core score of 12657 and 3272 for single-core operation. This equates to 4.5 times the speed for multi-core. However, when you factor in how much applications such as Final Cut Pro X are optimised far better for modern hardware, the gap is probably stretched a little further still.

So, let’s move on to video editing, now as much as I dislike the over simplification of Final Cut Pro X and its inability to export and compress video like it used to. It is a far more optimised and powerful editing application than Final Cut Pro 7 or 6. Its auto background rendering means that it’s very difficult to gauge a fair fight here. The old iMac is running Final Cut Pro 6, which isn’t fully taking advantage of its own hardware to begin with and in addition to that, it doesn’t have background rendering capability. This alone is an enormous handicap. This means each effect, transition and filter must be rendered before it can be previewed.

This slows the editing process significantly, whereas Final Cut Pro X is magical by comparison and you can view effects instantly, meaning your editing process speeds up a lot and with Mavericks making better use of the Macs system resources, there is an exponential increase in your overall productivity and a massive decrease in the amount of time spent staring at the screen. In short, depending on their size, your projects can be finished hours, days or if it’s a particularly big one, weeks sooner.

In this test, I’m taking a 1080p video of my unboxing of an iPad from 2010. I’m going to make the exact same video project on both machines. The 27-inch iMac will edit this in FCP X, while the 2008 iMac will do it in FCP6. I’m going to make the exact same two cuts on both timelines, one at 59 seconds and the other at 4 minutes. We will apply a black and white filter to the first segment we’ve created and a sepia filter to the second. We will then wait for the rendering to be done and output the files at medium compression settings to a final 1080p file format and see how much faster the 27-inch iMac is.

The 2008 iMac took 48 minutes just to render the effects I applied to it. By contrast, in Final Cut Pro X, these effects required absolutely no rendering whatsoever.

The 27-inch iMac using compressor, compressed and outputted the file in 17 minutes and 5 seconds. Producing a 151MB 1080p File. In addition, 1080p video editing on the 2008 iMac is simply unmanageable. The system is constantly beach balling when trying to scrub through 1080p video, it can do 720p fine, but 1080p is a bridge too far.

The final thing I will talk about is file transfer speeds. This is more an example of our rapid technological development in recent years than a direct point of comparison between the two machines. I conducted a Mac migration from the 24-inch iMac to the 27-inch iMac and it took 13 hours to transfer 571GB via Gigabyte Ethernet, then from the 27-inch iMac I used Time Machine to backup this data to my new Lacie USB 3.0 external hard drive. This process took just 1 hour.

Technology moves on quickly, this iMac will probably be considered slow in a few years itself, but right now, at this very second, it’s a fast machine, maybe not a Mac Pro or a custom built 8 to 12 core workstation, but it’s fast by most standards and a major upgrade. I’m glad I waited almost 6 years before buying a new computer. It meant I squeezed every last inch of performance from my old computer and can now enjoy the considerable speed benefits from the new one.

Be sure to visit my channel Lack78 and subscribe for more Tech Videos.