Retro Tech Talk: Were You a Sega or a Nintendo? 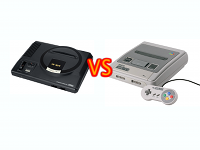 Sega Vs Nintendo, in the late 80s and early 90s, the console wars were fought between these two Japanese Tech Giants, it was very much the Sony Playstation Vs Microsoft Xbox battle of that era. Also, because personal computers still hadn’t penetrated the mainstream consumer tech market, it was probably the Mac Vs PC of that time also. I was a Sega man myself, from the age of 6 – 10, the original 8-bit Master System II was my gaming machine of choice with such titles as Alex Kidd in Miracle World, Ghouls & Ghosts, Altered Beast and Bubble Bobble.

Okay, maybe the last one was a joke, anyway, the comparative system from Nintendo was the NES, which was perhaps most famous for games like Super Mario Bros, The Mega Man series, Adventure Island II and the very classic, Duck Hunt. The systems were very easily matched in terms of overall performance the Master System was superior in terms of graphics, although gaming on the NES was far more innovative.

The bigger brothers to these machines were Sega’s MegaDrive (Genesis in the US) and Nintendo’s SNES. Both 16-Bit systems in so many ways were perhaps the cause of so much division in the gaming world. The MegaDrive included such famous titles as Sonic the Hedgehog (all the games in the series), Revenge of Shinobi, Toe Jam & Earl, Golden Axe, Streets of Rage and Mortal Kombat. The SNES was perhaps most known for Street Fighter 2: Turbo,  Donkey Kong Country, The Final Fantasy Series,  Star Fox and The Legend of Zelda.

There’s no doubt that the SNES’ superior Sony SPC700 sound chip provided stunning audio (for the time) when compared to the rather lackluster MegaDrive. But the graphical definition and image quality of the Mega Drive seemed technically superior. All in all, there was little to separate them, both consoles were exceptional for their time and a pleasure to play. The debate as to which was the better system continues to rage on today among those people who squandered an unconscionable amount of their youth playing them. So which system were you, Sega or Nintendo?

1 thought on “Retro Tech Talk: Were You a Sega or a Nintendo?”