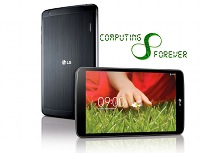 The LG G Pad 8.3, a fine Android tablet. Premium quality build, a decent performer and all for an affordable price point of €319.

It’s got an 8.3-inch display with a resolution of 1200 x 1920 pixels and 273 ppi pixel density, which is retina quality. However, it is a little dim, the colors look accurate and the viewing angles are nice but the luminosity just isn’t quite good enough when compared to the iPad Mini, which this is designed to compete against.

The processor is a 1.7Ghz Krait 300 of the Qualcomm Snapdragon 600 series and it’s a Quad Core chip, not that, that really means much in mobile terms. It’s quick enough for most tasks and no slouch for productivity apps, but the occasional slow down does occur. Nothing drastic and certainly no major issue, but while I did find CSR Racing perfectly playable, there is a slight frame rate loss when compared to the iPad Air.

LG don’t preload the LG G Pad 8.3 with too much bloatware thankfully, the proprietary apps they do provide are quite useful including LG Backup, which I recommend you use, QPair, for pairing your device to your Smartphone and this cool remote control app, which thanks to the IR sensor in the front, allows you to control your television. My Philips TV did eventually work with this tablet, it took some calibration and it can be a tad temperamental, but it’s a nice gimmicky party piece feature all the same.

There’s also LG’s answer to Siri, VoiceMate may lack the accuracy at times but it does have some personality. However, the VoiceMate network drops out more times than I feel is acceptable, making this a bit of a Beta app in my opinion. Still some work needed.

The front facing camera on the LG G Pad 8.3 is pretty standard fare but the rear camera is a big disappointment, it’s 5MP and images have far too much noise on them for my liking. As you might expect from a cheap camera, it doesn’t perform well in low lighting. It gets the job done, but it won’t set the world on fire.

Video is great to watch on the LG G Pad 8.3, nice to have full desktop mode YouTube at ones finger tips. Also video will pause when the tablet cannot detect your face, very handy. As we’ve come to expect from Android, you’ll find a plethora of great apps and customisation options available. Battery life could be better incidentally, extensive everyday use will mean you’ll be charging this thing a little more regularly than an iPad. On the plus side, the storage can be expanded at least, via the MicroSD slot on the top.

Build quality is excellent, it’s light, thin, easy to hold in one hand and the rear aluminum back plate gives a polished and premium feel to it. Overall the LG G Pad is a fine small form tablet but is let down by its dim display, occasional performance slow downs and average battery life. But I would personally be happy to own this device, for the price of €319 from Harvey Norman, it’s a capable little slate.