Apple Could Introduce A Mac Tablet After All 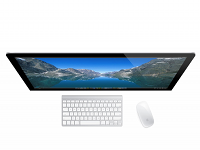 As an old school geeky tech anorak and computer enthusiast, I’ve always dreaded the idea that mobile devices would one day usurp desktop PCs. While there’s no denying the allure of sci-fi-inspired technologies like smartphones and tablets, which are now a ubiquitous part of our lives, the traditional display, keyboard and mouse setup remains my primary window to the tech world. Indeed my iMac is my machine of choice from both an ease-of-productivity perspective and general usage. However with mobile devices now outselling their older and clunkier desktop and laptop cousins, and the Post-PC era now well and truly upon us, conventional computers are becoming increasingly marginalised. Their market share continues to dwindle and their is a significant demand for apps, websites and games to be optmised for mobile-based multitouch platforms.

Although desktops are unlikely to disappear entirely as the Enterprise, Business and TV / Film Post-Production industries will no doubt continue to require them, their presence will likely further diminish in the consumer market given enough time. So does that mean that all future computers used by the average joe will be of the mobile variety? Possibly, but no doubt with a few important features from the desktop PC world thrown in. Following the recent news that Apple are considering 13-inch iPad prototypes, it stands to reason that their future Mac line of iMacs, Macbooks and Mac Minis could be retired or re-introduced as Tablets. How would this work? Well, the key elements here are two fold, firstly, future mobile processor architecture would need to catchup with their desktop counterparts and secondly, these tablets would require the ability to transform into full desktop computers. As it stands, most Tablet manufacturers offer Bluetooth keyboard accessories but this would need to take things a little further.

Imagine your daily driver computer is a tablet that you can dock with any wireless keyboard, mouse and even a wireless display. Ironically, Microsoft’s Surface Pro Tablet line would make for an ideal example of what we might be using in the future because it allows users to have both a mobile touch-UI experience and a full desktop OS when appropriate. Will Apple ever consider introducing a powerful Tablet computer that could run iOS on-the-go and OS X when wirelessly docked for desktop usage? Given the rapid rise of mobile devices, this concept has to at least be considered. Rumors that Apple have been busy testing larger iPad displays, suggests that they could offer a compromise between a laptop and a tablet. Who knows, in a few years, a 13-inch Tablet may not be considered too large to be portal if it’s a flexible, foldable screen.

Back in the Netbook days of 2009 when first rumors of Apple’s tablet computer began to surface, we all imagined it running OS X. With desktop operating systems simply unsuited for touchscreen usage, iOS was the wiser choice. Now with desktop computers looking likely to be a thing of the past, will Windows desktop and OS X be making an appearance on future tablets or will Microsoft and Apple find a way to more seamlessly integrate their legacy functions into their existing mobile OSes? Roll on the future….