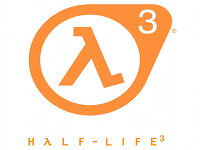 Half-Life 3 hasn’t been quite as much of a mystical unicorn of the gaming industry as say something like, Duke Nukem Forever was but it’s certainly close. Just to recap on the history of the Half-Life game franchise, back in 2007, Half-Life 2: Episode Two was released to much critical aclaim. This was an expansion pack to the second game in the series. The Valve Corporation had promised a third episode but one never materialised.

As the years rolled on, their focus shifted to the Portal Games and Episode Three was scrapped. But who needs another expansion pack for a game first released in 2004 when you can have an entirely new Half-Life game? The internet is abuzz once again with talk of a major new release from Valve, Half-Life 3 appears to be on the horizon once again.

This week, Valve trademarked the name Half-Life 3 in Europe with a filing said to cover “computer game software” and “downloadable computer game software via a global computer network and wireless devices”. Those descriptions can certainly be interpreted as fitting the bill for a bonafide sequel to the Black Mesa-based original. Surely an official announcement is imminent from Valve?

Furthermore, the production would appear to be a near certainty given the recent accidental leaking of Valve’s staff lists database to the public. This information became accessible earlier this week and included references to the developer groups and the game’s title. If Valve were trying to be tight lipped about this third installment, they sadly failed, however, if they deliberately allowed this leak to tease the public as some sort of viral marketing campaign and gauge consumer interest, then they succeeded brilliantly. The next question becomes, when will the game be released?

Valve are expected to make another major announcement in the coming days. The official confirmation of Half-Life 3 could be the perfect cherry on top of the icing that was the recently unveiled SteamOS, Steam Machines and the Steam Controller device. Certainly the Half-Life series has always provided major new gaming innovations with each release, what new gaming technologies can we expect from the third game? Time will tell. Right now, a 2014 release seems highly unlikely, 2015 seems more probable, although considering the exorbitant release cycle for Half-Life 2, we may be hearing those familiar words from Gabe Newell, “When it’s Done!”

Check out this week’s Computing Forever Video on YouTube: