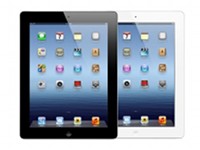 Yesterday Wednesday March 7th, Apple unveiled their eagerly awaiting third generation iPad tablet computer. Oddly they named it the New iPad, which breaks the traditional naming scheme of an ever increasing number to their next generation devices. Perhaps this transition brings their naming marketing strategy in line with their traditional computers such as the Macbook Pro. This popular consumer notebook has been updated a dozen times since its introduction in 2006 and yet isn’t referred to as the MacBook Pro 12. This adjustment to the name of the iPad could represent a shift in the product’s life cycle strategy. Macbook Pros for example are updated twice per year, maybe the iPad will also now be updated twice annually.

The major selling point of the tablet is the retina display, which achieves double the resolution of its predecessor at 2048 x 1536 and four times the pixels. The Processor, while remaining in the A5 family has also been modified with a quad-core graphics chipset, making gaming imagery more stunning and breathtaking. It is now known as the A5X processor. The rear camera has also received a noteworthy upgrade. Firstly it is now referred to as an iSight camera, which seems slightly confusing considering Facetime cameras found on all of Apple’s computers were once called iSight cameras. Name redeployments aside the rear camera not only offers the ability to take 5 mega-pixel HD images, it can also shoot full 1080P videos and provides image stabilisation, auto focus, face detection and auto exposure. The biggest sigh of relief for Apple customers will be the introduction of 4G LTE, which will provide significantly faster data speeds than standard 3G. Typing long form emails and documents just became a whole lot easier thanks to the addition of speech-to-text dictation. However the notable absence of Siri was a significant disappointed to many Apple fans.

Other than these hardware improvements you’ll notice that the device is slightly thicker than the iPad 2 at 0.37 inches vs. 0.34 inches. It’s also that little bit heavier at 1.44 pounds over the iPad 2’s 1.33 pounds. These design compromises are likely due to the inclusion of the retina display and possibly the increased battery size in order to compensate for the new processor. iPhoto has been added to the iLife suite of creativity and productivity apps and is available in the App Store now for $4.99 along with updates to iMovie and Garageband. Overall the keynote was rather underwhelming as this new iPad is more of an evolutionary upgrade. Maybe consumers have come to expect too much from Apple from these events, the golden goose of game changing products can’t squeeze one out every year but for the time being, this 2012 iPad is a nice entrée before something more substantial is served up. Perhaps the most telling indication that this new iPad failed to capture consumer imagination as nothing more than an incremental update is the positive reaction to the price reduction to the iPad 2. The 16GB version is now available for $399 for the Wi-Fi only model and $529 for the Wi-Fi and 3G model.

All good Apple keynotes are usually rapped up with a closing: “one more thing” segment in which the audience is treated to a surprise product announcement or special new product feature. This keynote was devoid of such fanfare but instead CEO Tim Cook concluded with some ominous and tantalisingly enigmatic words. “Only Apple could deliver this kind of innovation in such a beautiful integrated and easy to use way. It’s what we love to do, it’s what we stand for and across the year your going see a lot more of this kind of innovation, we are just getting started.” Is this simply PR / marketing rhetoric or do Apple genuinely have something game changing and revolutionary coming later this year? Let us know your thoughts on what you think Tim Cook and Apple might have up their sleeves and please take part in our poll below and tell us what you think of this new iPad.