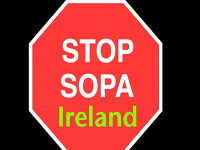 Yesterday Thursday March 1st an ill-informed Irish Minister called Sean Sherlock signed off on an internet anti-piracy law using a statutory instrument  that has been dubbed the Irish SOPA.

Even though millions of people around the world protested against such a law and SOPA, PIPA and ACTA, which were defeated. For some reason this guy thought it would be a good idea to ignore the cries of the majority of Internet users including the people who elected him, the 80,000 Irish people who protested against it and instead he listened to a rich minority of corporate big wigs in the music and film industry.

What does the law do? Effectively it does exactly what SOPA was meant to do. It provides the Irish judicial system with an open-ended power to grant orders against ISPs and intermediaries who provide facilities which might be used to infringe copyright. This includes but is not limited to hosting providers, social networks, forums, video hosting sites, your cat blog – basically the entire Internet.

The law is so vague that it’s hard to say what qualifies as a transgression. For example your at a wedding and you use your phone to film 30 seconds of the bride and groom on the dance floor. You share it with your friends on Facebook only to receive a strike from your ISP or a fine or Facebook could be even be sued because of the copyrighted material you just uploaded. I’m of course referring to the background music that was playing while they were dancing.

So obviously Facebook, who have offices here in Ireland and employ a couple of hundred people and want to double their Dublin-based workforce aren’t going to take the risk of being sued constantly. I mean how many times do you share a link or a picture on your wall that someone else owns? Probably a lot so, Facebook Ireland won’t be sustainable. They’ll get in trouble and the courts run by a bunch of old out of touch guys will force ISPs to block Facebook and indeed Twitter for the same reasons. Facebook will leave Ireland and Irish people will lose jobs. Good job Sherlock!

Internet users in Ireland and indeed around the world spend most of their time on Facebook, Twitter, Tumblr, Digg, Delicious, Flicker, Myspace, YouTube, Dailymotion to name but a few. All of these websites contain massive amounts of content that either does breach copyright or because of the vagueness of the law could be interpreted to be doing so and they will all be blocked. Because its referencing and bibliography contains links to other websites millions of them in fact, Wikipedia will also be an easy target. Why would anyone use the Internet if they lack access to the web’s most popular sites?

All of this is being done in broad brush stroke legislation that has been implemented to prevent websites like The Pirate Bay and others from being used. Fair enough if thats what they wish to do I won’t argue, we know that the music industry is not losing the kinds of money they are saying, it’s totally exaggerated but stamping out piracy is a noble goal. But the way in which this is being done, will (A) not do that at all because pirates will circumvent that easily enough, (B) it’s actually effecting innocent oblivious users going about their day who are not criminals. This is the end of social networking in Ireland and I’ve spoken previously, about how social networking has become a pivotal tool in rallying people together globally to create civil society groups and transnational solidarity networks. The occupy movement could not have been organised without social networking, it has become not only a crucial instrument for business but also for democracy. It pushes across boundaries as the Internet was designed to do. Under SOPA, freedom of information and free speech are all gone because forums can be closed too for the same reason.

If your blog about your cat pebbles contains a link to a website that has copyrighted content, you basically get in as much trouble as the copyright offender because your effectively aiding and abetting them. So your website can be blocked. This is so silly it destroys the Internet and makes it unusable. This is going to scare away foreign investment to Ireland. Google have their European headquarters in Dublin, they’ll be one of the biggest ‘offenders’ of this law and they’ll leave the country.  The nation is in a really bad state economically and we’ve picked this time to introduce a draconian law that will put many Irish people out of work and fracture Ireland off from the rest of the world. Minister Sherlock speaks in riddles of political rhetoric when he say this is being introduced to create innovation in the IT industry. Ironically it will destroy our knowledge economy and kill innovation. It does nothing to stop the criminals it was meant to punish and it instead makes criminals out of the average joe and punishes them.

This is a violation of the European Convention on Human Rights and yet it hasn’t even gone before anyone in Brussels let alone the Irish people.

This is going to effect Ireland’s reputation, which has taken a severe pounding in recent years and will make it a very unattractive place to do business. I’m ashamed to be Irish today, I’m embarrassed when talking to foreigners about this because it makes Ireland seem backwards and stupid. All this because of one trigger happy jumped up Minister who believed that if he introduced this that it would put Ireland at the forefront of the fight against piracy. He was seduced and manipulated by the film TV and music industries who baffled him with their corporate propaganda….

….and for what? So that they can protect their out of date business models. Shame on you Minister Sherlock. My advice to you Minister is to Google your name followed by “SOPA” and read the comments on forum after disgruntled forum. It is clear that your political career is over after this fiasco. You have presided over a dark day in the history of Irish democracy and we the people will not tolerate this or comply with the consequences of this law.

Click on the link below to watch the video: