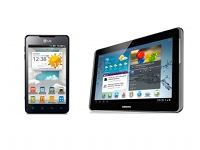 Samsung have announced the all new Galaxy Tab 2, which will come in 7 and 10 -inch editions. This is the successor to their controversial tablet from last year that repeatedly landed the Korean manufacturer in legal hot water with Apple over a copyright infringement of the ipad design.

The display resolution has been increased to 1280 x 800, other than that the specs seem surprisingly standard fair with a 1GHz dual core CPU, 1GB of RAM and front and rear cameras. However battery life is expected to to be given a boost with the addition of a 7,000 mAH cell. The familiar TouchWiz UI sits on top of Android 4.0 Ice Cream Sandwich. There is no word yet on pricing but the Galaxy Tab 2 should hit stores in the UK first in March.