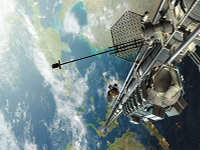 Why buy a stairway to heaven when an elevator is much faster? A construction company based in Japan called Obayashi want to build a space elevator by the year 2050. Sound ridiculous? Well actually the theory behind such an ambitious project is less science fiction and more science fact. The structure would be held in place from the ocean floor somewhere near the equator. It would extend 60,000 miles up through to geostationary orbit with a counterweight terminating in space. Comprised of incredibly strong carbon nanotube-enforced cables the tether would allow a large elevator to carry up 30 passengers to a space station at a speed of 300km/h. The journey would take 5 days to reach geosynchronous orbit. Such a structure would naturally mean that space faring nations would no longer have to rely on expensive rockets to ferry crew and equipment into orbit. Although it is clear that it would be some time before the financial benefits could be reaped, considering the astronomical costs involved in its construction.

An official for Obayashi said “At this moment, we cannot estimate the cost for the project”. He went on to say “However, we’ll try to make steady progress so that it won’t end up just as simply a dream”. In 2009 NASA held the Space Elevator Games, which were designed to simulate the development of the materials, technologies and techniques needed for such a construction. LaserMotive were declared the winners with their laser beam-powered robot, which was capable of lifting a weight along a cable faster than two meters per second. Their prize was $900,000. In 2001 Bradley C. Edwards of Carbon Designs Inc. proposed an estimated cost to build a space elevator at $20 billion ($40B with a 100% contingency).