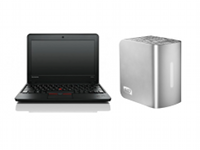 It’s been another busy week in the world of technology and I missed a good deal of it while I was on holiday in Paris. Here are two of this week’s major stories that caught my eye. MacWorld 2012 provided yet more innovation from third-parties eager to cash in on the Apple ecosystem. Western Digital introduced their new MyBook ThunderBolt Duo external hard drive, which provides two 3TB hard drives in the enclosure along with two ThunderBolt HI-speed I/O ports. This makes it a perfect backup / storage module for your Mac but additionally the second port allows you to daisy chain several drives together. In their demonstration WD linked up four of these external hard drives via ThunderBolt. Thanks to their bundled software, the Mac was capable of recognizing the drives as one large 24TB volume.

Also this week Lenovo have unveiled a new ThinkPad called the X130E, which targets the education market at an aggressive starting price point of just $469. The notebook features an 11-inch HD display with a resolution of 1366 x 768 and offers processor options of AMD Fusion E-300 or Intel Core i3 chips. Weighing in at just 3.9 pounds and measuring just 1.29 inches in thickness this is certainly bordering on ultrabook territory. Furthermore its chassis has been toughened to withstand that little bit more wear and tear than your average notebook. Its military grade build quality boasts 33% stronger edges, recessed ports and tougher hinges for greater durability.

For these tech stories and more be sure to watch our featured YouTube video below from Lack78.