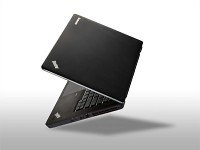 Lenovo has preempted the upcoming product launches from CES by introducing an updated lineup of ThinkPad laptops for the SMB market. Beginning with the sleek and stylish ThinkPad Edge S430, which offers a 14-inch display, the latest Core series processors from Intel, a DVD-drive, 1TB of storage, Nvidia Optimus graphics switching technology, Dolby Theatre sound, USB 3.0 ports and a range of business centric features such as the Lenovo Solution Center. Also making a welcome appearance is Intel’s ThunderBolt high speed I/O port, which will allow the transfer of a full-length HD movie in less than 30 seconds. Of course ThunderBolt, based on the Light Peak standard was first introduced on the 2010 model of the MacBook Pro launched in February of last year. The S430’s striking design measures less than an inch thick and is complete with metal accents and Mocha Black soft touch finish. The S430 won’t be available for another 5 months however with prices from $749.

The ThinkPad Edge E-series is comprised of the 14-inch E430 and 15-inch E540 notebooks, which now offer optional discrete or integrated GPUs, solid state storage drives and faster processor chips. The E-series is available in a range of clamshell color options such as Midnight Black, Heatwave Red and Cobalt Blue. These laptops are due to launch in April from $399. The Lenovo B Series is the low-end alternative of the series and offers a value option complete with AMD Fusion APUs and a starting price point of $349. There are four models the B480, 485 and B580 and 585. Other noteworthy features include HDMI out and a 4-in-1 memory card reader.