NASA to unlock secrets of Europa with Lander Mission 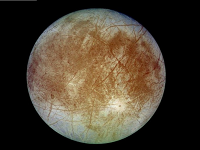 Widely regarded as the most likely home to life in the solar system beyond planet Earth, the Jovian moon of Europa may soon be paid a visit by two NASA probes. Scientists at JPL (Jet propulsion laboratory) in Pasadena, California are in the process of devising a concept mission to send two robotic spacecraft to the surface of Europa in 2020. Europa is the smallest of the four Galilean moons and slightly smaller than Earth’s own moon. What has fascinated members of the scientific community about Europa is the tantalizing possibility that beneath its thick icy surface may lurk a vast ocean of water, capable of supporting life. The theory behind the possible presence of water inside his enigmatic little world is based upon its smooth and striated topography. The surface of the moon appears to be cracked and lined with streaks but has very few crater impacts.

This unusual appearance of the moon’s surface bares a striking resemblance to ice formations found in Antarctica. Scientists believe that this geological evidence suggests a significant amount of liquid water may reside within Europa. Furthermore its orbit around Jupiter appears to exert enormous tidal flexing, which could be a source of heat within the liquid water. It has been postulated that deep sea hydrothermal vents like those found in the Pacific Ocean may exist within Europa and could even support primitive life forms.

The proposed mission could launch in 2020 with the landers reaching Europa six years later. The probes would weight approximately 320 kilograms and carry onboard an array of scientific instruments such as a mass spectrometer, seismometers and cameras. The mission will not be without risk. Europa is regularly bombarded by radiation from Jupiter, which could render the probes useless in a short time. It is estimated that the life expectancy of the landers will be roughly seven days. JPL astrobiologist and planetary scientist Kevin Hand told Space.com: “Europa, I think, is the premier place to go for extant life…Europa really does give us this opportunity to look for living life in the ocean that is there today, and has been there for much of the history of the solar system.” The ambitious project is estimated to cost as much as $2 billion.