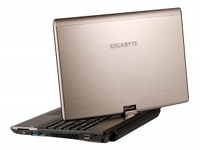 Gigabyte’s Booktop convertible Tablet computer is certainly a unique offering. With its swivel screen and innovative docking station it can be quickly transformed from a Tablet to a Netbook and finally to a traditional desktop computer. Now the new 11.6-inch Booktop T1132 has received a much needed hardware speed boost over its predecessor the T1125. The Taiwanese-based manufacturing giant has beefed up the hardware specs with the latest tech from Intel and Nvidia. The new 1.6GHz Core i5 CPU and a Geforce GT520M graphics processor provide ample horsepower and RAM options can be increased from 2GB to 8GB. On the subject of graphics, the aforementioned 520M includes Optimus switching technology, which will automatically switch between discrete and integrated GPUs. 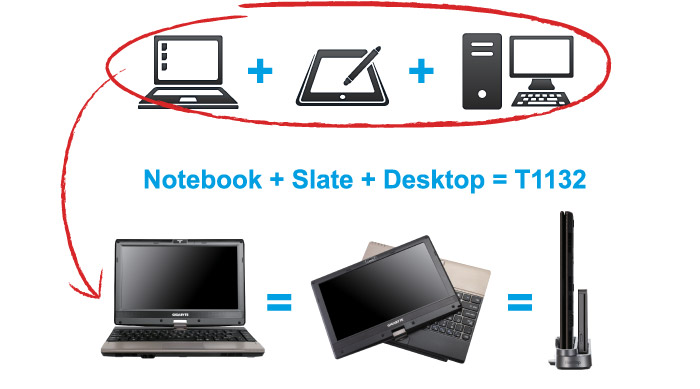 Among the other noteworthy features found in the T1132 include USB 3.0, 4 dual-channel speakers with THX TruStudio Pro, a capacitive multi-touch display, 1.3MP camera and a 6-Cell battery. I/O ports include HDMI, D-sub, RJ45, and audio inputs. As you might expect Wi-Fi and Bluetooth come as standard with optional 3G support available. The docking station is perhaps the most significant aspect of the product. Not only does it allow the device to be transformed into a desktop PC but it also includes a detachable USB-powered DVD Super multi dual-layer drive. Your operating system options include either Windows 7 Home Premium or Professional. At present Gigabyte has not disclosed the pricing details or release date for the new T1132.