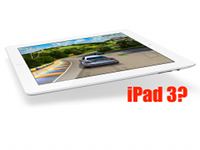 According to a Wall Street Journal source the next generation 2012 Apple iPad will feature a high resolution display built by Sharp in Japan. Apple are already availing of Sharp’s services for their iPhone displays and are expected to implement a low-powered screen based upon IGZO (idium, gallium, zinc) LCD panel technology. The advantages of such a panel in the iPad 3 would result in reduced power consumption and increased battery life. Although a much higher resolution is expected, it is not known if the elusive retina display experience will feature in the iPad 3.

Apple’s desire to expand its supply chain sources beyond the traditional manufacturing powers of LG and Samsung is seen as a necessity following the ongoing lawsuits with Samsung. The iPad 3 is rumored to be introduced some time between February and April of 2012. In addition to a higher resolution display, many users are quietly hoping that an anti-glare option is also provided. To date one of the major complaints about the device has been the reflectiveness of the Tablet’s screen, which can make it difficult when reading outdoors in sunny conditions.

Other potential features on the wish list include the Siri voice assistance application, which was introduced in the iPhone 4S. The addition of an SD card slot would also be most welcome. It would be great if there was an easier and more convenient way of getting photos and movies onto the device itself. I’m also hoping that Apple will one day retire the proprietary 30-pin dock connector and replace it with a ThunderBolt port, which would provide far higher I/O connectivity speeds.