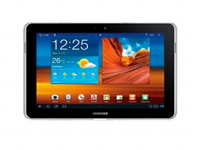 It has been reported by MobiFlip that Samsung have attempted to appease Apple’s lawsuit injunction in Germany by slightly remodeling their Galaxy Tab 10.1 Tablet. As you can see from the comparison pictures below, the Korean Tech manufacturer has implemented a thin metallic frame around the perimeter of the device. The change, although not dramatic appears sufficient enough to differentiate it from the Apple iPad, which Samsung have been accused of copying in the design of their Galaxy Tab.

Other than this cosmetic tweak, the German website could not determine if any other physical changes had been made to the Tablet. However Samsung have revised the name and now designate it the Samsung Galaxy Tab 10.1 N. Apple were granted a preliminary injunction against the sale of the device in Germany on the 10th of August 2011. A similar injunction has prevented sale of the Tablet in Australia. It remains to be seen if this newly modified Galaxy Tab 10.1 N will be launched in that market also in order to counteract the injunction there aswell.