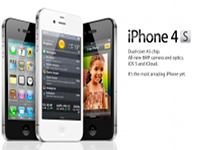 Despite retaining the exact same design as the iPhone 4, the newly unveiled iPhone 4S was showcased at Apple’s keynote address today where CEO Tim Cook took to the stage. The smartphone provides many new features not only thanks to the upcoming iOS 5 update (available October 12th) but also some iPhone 4S specific features. The 4S is due to be launched on October 14th in the US, Canada, Australia, Japan and the UK and in 22 other countries on October 28th.

Apple also updated their iPod lineup with the Nano given some minor UI-based additions and the Touch now running iOS 5. Check out our full keynote review video below.