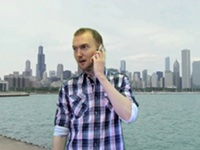 In Today’s light hearted Technology debate video I’m asking you the question: In a hypothetical situation if you had to choose between the following two Worlds to live in, which one would choose? A World where mobile phones existed but the Internet did not or a World where the Internet existed but mobile phones did not. You may want to give it some thought before you answer because either scenario could pose some everyday problems that you had not initially envisaged. For me personally I would find living in a World without mobile phones far more difficult from a practical day-to-day living perspective. Since people have been carrying mobile phones long before the Internet downloaded it’s way into our homes, laptops and handsets society has developed a symbiotic relationship with them.

The absence of the Internet would mean we would loose everything from online shopping, gaming, banking, email, social networking, blogging, up-to-date news feeds, vast historical research archives and much more besides. But a world without mobile phones would potentially have even more of a detrimental impact on our lives. We would no longer be able to instantaneously communicate to friends and family and we would once again have to rely on rigid timing and planning of meetings and appointments. Whats more the peace of mind that mobile phones provide is something that is only evident when we are without them. From a security and safety perspective alone I think mobile phones are more central to our everyday communication habits. Being lost somewhere with no means of being contacted is one such example of this. It might seem a little sad to admit it but leaving the house without my phone feels as disconcerting as forgetting my wallet or keys. But lets be honest humans survived for 2 million years without either and did pretty well so believe it or not we’d probably adapt to their absence far better than we might think. Thats just my opinion however and I’m very much looking forward to hearing yours. Click on the video box below to watch the video and join in the discussion. Be sure to subscribe to Lack78 for more.