What is Your Computer History? 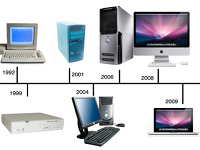 I’ll be showing my age by answering this question. My first computer was a Commodore 64C, which without it’s display and external floppy drive looked a lot like a large qwerty keyboard. The 64C featured a radical new design over it’s predecessor with a sleeker form factor and some minor under-the-hood changes with new versions of the SID, VIC and I/O chips inside along with a lower core voltage. My brother had bought the Terminator 2 bundled edition in 1992. The game cartridge included Music and Image Making applications and of course T2 the game. Cartridge-based consoles had only really started to make waves during the late 80s and the addition of such ROM expansion was very welcome on the 64 but it’s primary method of loading the majority of the software titles continued to be through floppy diskette drives and cassette tape input. I never owned a classic 1541C floppy drive from that era but I did have the opportunity to borrow a friend’s Datasette 1530. The long and arduous process of detecting and loading the tape drive was precarious to say the least. The 300 Baud modem-style sounds emanating from the device still linger in my memory as they converted analog audio into a digital data format.

Looking back I can recall the rife instability that accompanied this archaic method of launching programs. Inexplicable software issues were common and accepted as a necessary evil in the quest to play your favorite games, often just trying to troubleshoot these problems was more challenging and satisfying than anything the games themselves had to offer. Aside from cassette tapes I learned how to type (albeit with my index and middle fingers) by physically inputing lines and lines of basic code and programming applications from there. Back in those days computing really was a literal computational process requiring the user to posses a modest knowledge of how the software worked. The 64C was a versatile consumer desktop PC with a wide range of software applications and expansion peripherals available from tape and floppy drives to printers and mice, plotter devices, modems and monitors.

Throughout the late 80s and early 90s Alex the Kidd in Miracle World on the Sega Master System 2 provided me with my first gaming calluses thanks to the console’s rather non-ergonomic joypad design. Other titles that were responsible for whiling away my youth include Altered Beast, Gauntlet and Chase HQ. While many of my friends were busy upgrading from their Nintendo Entertainment System to a SNES following the launch of Capcom’s Street Fighter 2 in 1991, I was saving my hard earned pocket money for a Sega Mega Drive 2 (Aka Sega Genesis 2 in the US). As a big fan of platform games Sonic the Hedgehog was the pinnacle of my console exploits. Sonic 2, 3 and Knuckles provided endless hours of button bashing fun before the year 1995, by which time average consumers were buying PCs and the Internet was suddenly attainable to the masses. In 1997 my brother bought our first Windows PC, which was a custom built-to-order model from Jaguar computers in Dublin. It featured an Intel Pentium 1 MMX CPU with 32MB of RAM and a ‘colossal’ 4GB hard drive. Such storage capacity was considered so large that it was common practice for the disk to be partitioned into 4 parts. I finally got a my own Computer in 1998, which was a 6-year-old Dell 486 running Windows 95 and sporting an old school BNC Coaxial connection point, which was the standard network I/O on PCs from the earlier part of that decade. The machine itself was a large grey-white desktop sans a CD-ROM drive. I can still vividly recall loading programs, files and documents through the 3.5-inch floppy drive and playing Magic School Bus. Simpler times. From 1998 to 2001 I had a myriad of branded and custom-built PCs. Only one Elonex Pentium 1 75MHz actually stands out from the vast scrapyard of now defunct hardware, probably because we overclocked it to a more usable 120MHz.

In 2001 AMD had a slight edge over Intel and as a result I built a powerful gaming and video editing rig with a dual processor ATX motherboard that housed two 1.5GHz Athlon 1800s and 1GB of RAM. It was a monster at the time, I only wish I could recall what GPU I had installed. However my building prowess left a lot to be desired and the machine suffered from severe cooling issues. In the two years of it’s life almost every component in the box failed from RAM, power supply, hard drive and even one of the CPUs. I had grown tired of the tinkering PC enthusiast lifestyle, which lacked the security and peace of mind that accompanies a warranty. Consequently my next PC was a Dell Dimension 4600. A mid-range affordable consumer tower with modest specs and a Pentium 4 chip. Although it provided sufficient power to help me complete my Mars Documentary project in 2004, by the end of the following year it was clear that I had scrimped on the machine’s hardware configuration. In 2006 out of boredom more than anything I splashed €3500 on a workstation Dell Dimension 9200 with a powerful Core 2 Duo CPU at 2.66GHz. I even configured it with 4GB of RAM, which was excessive at the time and a powerful Nvidia Geforce 7950GT graphics card. Over the next 18 months the machine served me well as a gaming and video editing workhorse but I became tired of Windows XP’s poor system performance, stability issues and tired UI. The 9200 also suffered through a rather bleak period in my computing history in which it had succumbed to repeated infections of malware, spyware and adware. With Windows Vista failing miserably for Microsoft and my video editing skills needing the professional edge that only Final Cut Pro could provide, it was finally time for me to make the big switch after 18 years of using PCs. Following the massive success of OS X Leopard there had never been a better time to go Mac and In May of 2008 I purchased my current 24-inch 2.8GHz Core 2 Duo iMac, which has been the most stable and productive computer I’ve ever owned. I’ve produced hundreds of hours worth of video projects and successfully launched a YouTube blogging career. In 2009 I added my 13.3-inch MacBook Pro to my computing arsenal, which has been a stalwart companion for my mobile productivity needs. I’m certain there will be many more desktop PCs and notebooks in the future and I am already looking to upgrade my iMac to a newer model sometime next year. I’m very much looking forward to hearing all about your computing history.