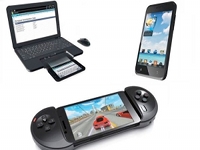 Perhaps Asus were on to something when they introduced their uninspiring PadFone concept, which was a smartphone with a plug-in Tablet accessory. Now Korea Telecom have produced the Spider phone, which expands the idea to three accessories. The 4.5-inch Android-powered handset runs 2.3 Gingerbread and features solid specs with a 1.5GHz dual-core Qualcomm CPU, 1GB of RAM, front and rear cameras and 16GB of storage. It boasts a hugely impressive display res of 1280 x 800 and can be docked with a 10.1-inch Tablet display, a Laptop chassis and a handheld gaming cradle. Each accessory adds a few specific functions to the user experience. The Spider Phone docks into the Laptop via a connection point where a traditional trackpad would feature. The Phone’s touchscreen then becomes the trackpad and users can now take advantage of the laptop’s larger screen and full Qwerty keyboard. The Tablet is docked with through a compartment at the back in a similar manner to the Asus PadFone. This is a nifty way of increasing the screen real estate of the phone to a more generous 10.1-inches. 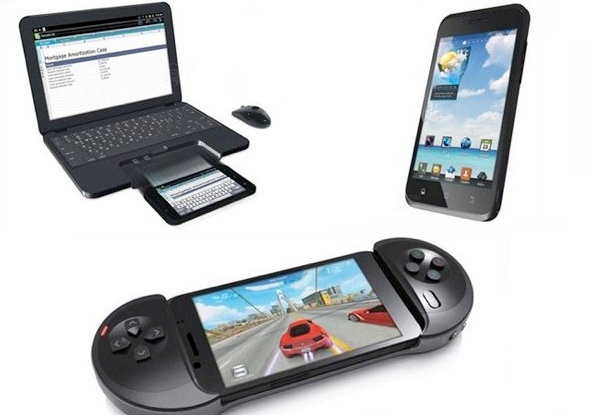 Finally the Gaming dock is a cradle for the smartphone to be placed inside. Loosely resembling a Sony PSP the user can now play the latest Android titles with the aid of a D-pad and physical buttons. Its important to note that none of these accessory docks actually contain any internal hardware components like processors, RAM, storage etc. All of the horsepower is contained within the 4.5-inch Spider Phone itself and is required to power all of these peripherals. There is currently no word on pricing information from KT but we expect a Korean launch sometime in November or December.