Windows 8 Explorer To Feature Ribbon UI But is it Enough? 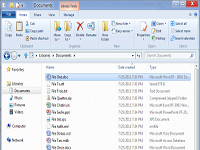 Microsoft have unveiled another raft of improvements for their upcoming Windows 8 OS with some refinements to the Windows Explorer. The Redmond Software giant has listened to it’s users and has apparently attempted to create a better file management experience, which exudes reliability and ease of use. The ribbon UI allows you to have an at-a-glance view of all of the most frequently used file management and organization commands within Windows such as cut, copy, paste, delete, new folder etc. This improved layout provides a one-click control of all of these functions without the need to right click. Microsoft have also implemented keyboard shortcuts for even more convenient access to these functions via the ALT key. Among the other notable new features and enhancements in this release of the updated Explorer is Copy Path for a quick and simple way of sharing shortcuts to locations on your computer with other users in a network environment. The Share Tab also allows you to simply email files much more efficiently and simply with just a click or two. The View Tab is ideal for viewing photographs for example. This offers the ability to select varying image sizes for the image previews within an Explorer Window. 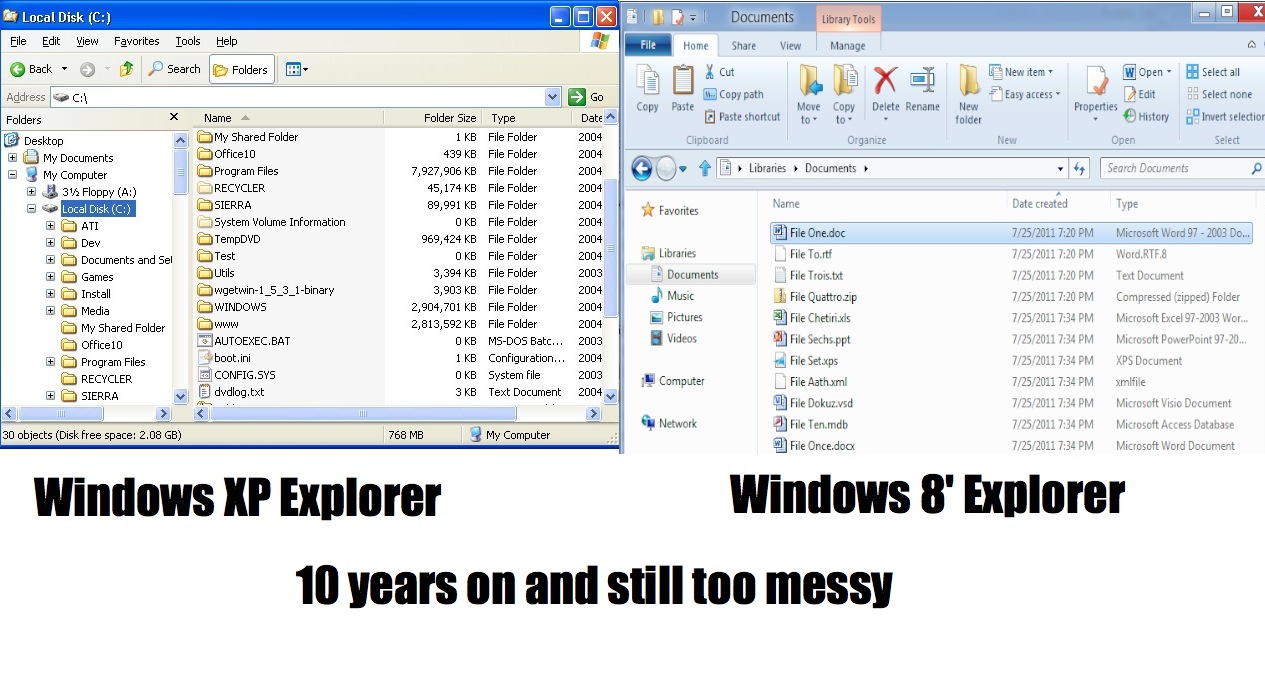 As welcome as these new refinements may be, overall I’m concerned that Microsoft are losing sight of the true innovations that matter. These minor adjustments to Windows seem a little extraneous and tacked on. As we move into the post-PC era, user expectations on how they interact with their devices has changed and consumer’s now crave clean, intuitive and functional-looking operating systems. In essence, the file system within the OS itself should be as unnoticeable as possible. Windows Explorer is still too cluttered and messy with unnecessary levels of complexity in the layout of the UI and little effort given to hiding it. The overwhelming vibe I get when I see these Windows demo videos is that Microsoft lack the creativity to redevelop the OS from the ground up for the average consumer by throwing out the rule book and starting again. Instead they continue to make minor revisions that feel more like barely noticeable tweaks for the benefit of their own internal developers and network engineers. Although there may be a handful of useful ancillary refinements in Windows 8 the dated looking Explorer was never a fun environment to spend a good deal of time in anyway due to it’s clunky and aesthetically unpleasing design, which makes this new ribbon UI rather redundant. In comparison to OS X Lion’s cleaner and smoother Aqua interface and vastly simplified application and navigation features in Launchpad, Mission Control and a rewritten Finder, Apple have comprehensively banished many long standing interface control and file management demons, which continue to haunt Microsoft’s Windows OS series. Ballmer and Co. seem to continue to be forgetting to focus on the core fundamentals with each release and Windows 8 is shaping up to be nothing more than Windows 7 with an optional Touch-Tile UI on top and a bunch of banal and barely useful changes underneath.

Click on the video box below to view the demo video of Microsoft’s new Windows 8 Explorer with Ribbon UI.

1 thought on “Windows 8 Explorer To Feature Ribbon UI But is it Enough?”