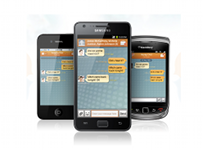 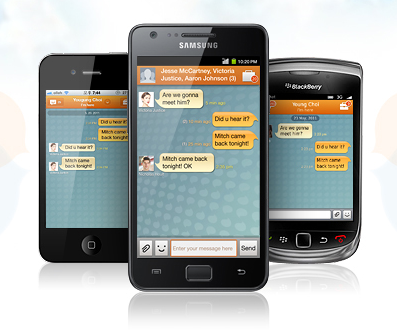 This year Apple introduced iMessage as part of their new iOS 5 update, which will be an SMS-style messaging service for the iPad, iPhone and iPod Touch. Now Samsung looks set to take things that one step further with a cross-platform implementation of a similar messaging App called ChatON. This software will be compatible for not only all iOS devices but also those running Android along with BlackBerry and Samsung Bada handsets also. This free App is expected to debut sometime in September in 120 countries. Not only will users be able to send and receive free text messages and images but ChatON also allows you to create your own unique animated card by using hand drawing, photos, text backgrounds and music. Samsung have today launched 3 new smartphones all running their Bada OS including their new flagship handset the Wave 3. The Wave 3 offers a 4-inch AMOLED display and a 1.4Ghz CPU. All three smartphones feature this ChatON global communications service. Described as “Samsung’s global mobile communication service that works across all major smartphone and feature phone platforms. ChatON lets users interact with friends and family, regardless of device platform – functionality across multiple platforms lets all users join in, with text, images, hand-written notes and video shared instantly. Users can chat in groups, while a Web client will allow the easy sharing of content and conversations between mobile and PC.”

Click on the video box below to view the demo video.