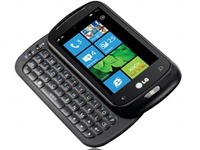 I’ve been given the chance to have a hands-on look at the LG Quantum smartphone available from AT&T in the US. It features a 3.5-inch WVGA capacitive multi-touch display. It offers a full slide-out qwerty keyboard. As you can see from the image below its running Windows Phone 7. The biggest unique feature found on this device is its DLNA capability, which allows for output of video from the device to any DLNA enabled television. Launched in October of 2010 its also known as the Optimus 7Q internationally. The slide-out keyboard is very responsive and feels good to type on with individual slightly domed keys that offer an accurate and satisfying typing experience. 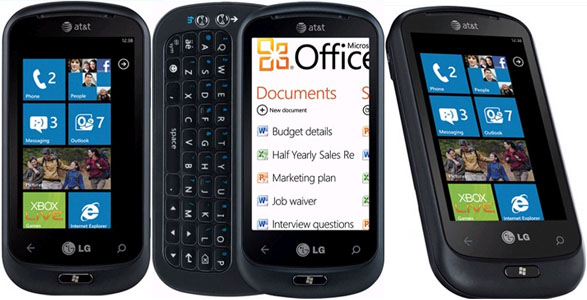 You’ll also find a microUSB port for charging and transferring of files to and from the device. Under the hood this Windows Phone 7 handset is powered by a 1GHz processor it features 512mb of RAM, Accelerometer, Compass, GPS and comes as standard with 16GB of internal storage. The rear camera offers full 720p video capture and 5mp still image capture with auto focus. There are a few minor drawbacks however, it lacks 4G support and a front facing camera and whats more despite having an accelerometer the Quantum only supports a limited landscape mode for certain features. This may become frustrating when attempting to navigate around menu systems on the phone as some of the UI responds to the tilt of the accelerometer into landscape and the rest of it remains in portrait mode. The phone feels like a solid device weighing in at just 176g marginally heavier than the iPhone 4 but again this does offer a slide-out keyboard, which adds to its weight and bulk despite being relatively trim at just .60 of an inch thick. LG have also developed their own unique brand of apps for the Quantum. You’ll find a range of apps from productivity to messaging and from voice-to-text, entertainment and many more. As a nice touch their all free. Overall the LG Quantum is a nice alternative to the wide range of Android handsets on the market. At just $400 off contract its an excellent option for anyone looking for a feature rich Windows Phone 7 smartphone with a physical qwerty keyboard for typing. AT&T are offering the phone on contract in the US for $49 over two years.

Click on the video box below for the hands-on review video.