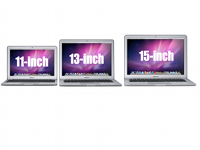 According to sources at Macrumors.com Apple may be planning on introducing a 15-inch version of it’s popular ultraportable notebook the MacBook Air. Reports indicate that Apple are currently testing such a device but have not yet decided if it will indeed become part of the Air lineup or in fact feature as part of a next generation Macbook Pro Product category.  Apple have recently retired the White Macbook from their Mac family and this has meant that the 11-inch Macbook Air now takes it’s place as the companies entry-level consumer notebook. The discontinuation of the Macbook also represents a move away from optical media drives. This in turn has led to the evolution of consumer notebooks towards the standardization of  super thin ultraportable laptops as the new norm, where they were once previously considered luxury premium machines.

As previously mentioned this hypothetical 15-inch ultraportable Mac laptop may in fact be a redesigned Macbook Pro. The Pro has not had a physical overhaul since the introduction of the current Aluminum unibody version in 2008. At present there is no expected release date for such a device so we’ll have to sit tight on this story for the time being.