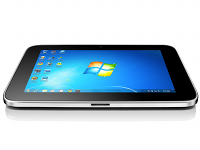 Seemingly attempting to cover all it’s bets Lenovo has today introduced a new IdeaPad Tablet alongside it’s Android-powered brethren known as the P1 running Windows 7. The 10.1-inch display offers a 1280 x 800 capacitive display and features a 1.5GHz Intel Atom processor along with 2GB of RAM and 64GB of solid state storage.

Theres also a front facing camera, Wi-Fi, Bluetooth, USB 2.0, MicroSD and optional stylus input, which is probably the best way of interacting with Windows in touch-based form. Theres no pricing details yet but we expect a release date sometime around the end of this year. It seems like an odd choice for a manufacturer to introduce a Win7 Tablet at this stage considering the lack of success that OS has enjoyed in the mobile arena. A full point and click designed desktop OS is simply not conducive to a touchscreen form and usually needs additional clunky proprietary controls tacked on top in order to make the interface somewhat usable. In this case Lenovo has apparently not included such third-party controls. Windows 7 has been largely unsuccessful in penetrating the mainstream Tablet consumer market due to it’s slow performance, cumbersome UI and poor battery life. Conversely it has enjoyed moderate success on rugged and business-style Tablets, where Windows XP has traditionally been more dominant. Personally I’m looking forward to seeing a greater level of consumer adoption of Windows 8 Tablets when the OS is released next year. It’s live tile application screens will make for a more intuitive and simplified user interface, which could make for a fresh and exciting change from those found on iOS and Android.