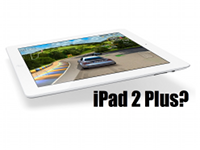 When Steve Jobs introduced the iPad 2 in March of this year he stated that 2011 was “the year of the iPad 2”. This seemed like confirmation that there would not be a third iPad device released until 2012. However reports from FBR Capital Markets analyst Craig Berger point to the release of an updated iPad 2 later this year, which he dubs the ‘iPad 2 Plus’ or something to that effect. Berger states that “There are some indications from the supply chain that Apple may look to introduce an ‘iPad 2 Plus’ device as they put out request for quotes from various component suppliers for this marginally different device”. “We now hear that component makers have received request-for-quotes (RFQs) from Apple for an ‘iPad 2 Plus’, though no production schedule has yet been confirmed with suppliers.”

Many of you will wonder why Apple simply doesn’t call this updated tablet the iPad 3. But this may be a careful tactical maneuver in order to maintain the companies marketing mission statement that 2011 is indeed the year of the iPad 2. Otherwise this may lead to some rather disgruntled consumers who invested in the iPad 2 believing their device would not be made obsolete until the following year. Furthermore Apple’s naming schemes for it’s devices have not always been given sequential numerical designations and this is evidenced by the history of their iPhone line. If this new iPad 2 is indeed a minor incremental update then it stands to reason that the devices design and form factor will remain largely unchanged. Many sources believe this updated iPad 2 may feature a high resolution retina display with a potential 250-300 pixel density.