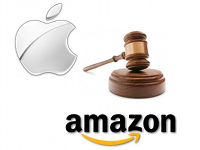 Well it seemed inevitable but following Apple’s allegations that Amazon’s use of the term ‘Appstore’ for their digital distribution platform was an infringement on their own App Store trademark, the legal bell has been rung for the time being at least and round one goes to Amazon. Apple claimed that the use of the term Appstore by it’s competitors Amazon and Google was not only a breach of copyright and a cause of confusion for consumers but also a tarnishment of their product quality. A decision to deny Apple’s injunction was made by U.S. District Judge Phyllis Hamilton who stated that Apple were unable to provide sufficient evidence of a “a likelihood of confusion”.

The case has been set for a trial date on October 2012 so for the time being Amazon are free to continue using the ‘Appstore’ moniker. Apple maintains that the term ‘App store’ is not a generic lable and “has asserted that Amazon’s service is inferior and will tarnish Apple’s mark.” Apple have cited several examples of Apps in Amazon’s Appstore that bypass Android security measures and even ‘Malicious’ pirated Apps in the Android Market Place itself. The Cupertino software giant believes that the existence of these unregulated and low quality Apps are having an effect on consumer perception of Apple’s own App store and they maintain that Amazon’s use of the term ‘Appstore’ is detrimental to Apple’s business by association.