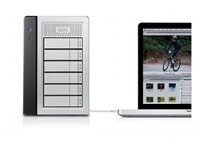 Early tests of the newly released ThunderBolt cable this week have revealed that users will now be able to boot their Mac from an external ThunderBolt hard drive at super fast speeds. This will mean that we could start to see users purchasing desktop Macs such as Mac Pros, Minis and iMacs with a small amount if internal storage and then purchasing a larger external ThunderBolt-equipped drive like Lacie’s Little Big Disk, installing OS X on it and using that as their primary bootable drive. This has the added benefit of allowing users to unplug the drive and effectively take their Mac with them wherever they go. Theoretically the drive could then be plugged into any other ThunderBolt supported Mac and from there they can boot directly into their external hard drive by simply selecting it as the primary system drive.

USB 3.0 offers a respectable maximum speed of 5Gbps while ThunderBolt provides double that or to put it in reletative terms, Intel describes it as being able to “transfer a full-length HD movie in less than 30 seconds”.