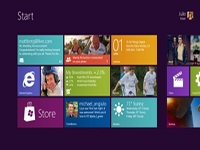 In an impressive video demonstration, Microsoft have demonstrated the impressive new touch-based UI of Windows 8, which will soon be running across multiple platforms such as Notebooks, Smartphones, Desktop PCs and Tablets. The first new feature of note is the tile-based Windows Phone 7-inspired start screen, which is described as a personal mosaic of tiles. These tiles represent every app on your computer. This allows for more information to be seen at a glance and for live updates to be integrated into things like web widgets. A very cool way of cycling through open apps is taking your finger and swiping from the left side of the screen towards the centre. This switches from one open app to another. Developing on this unique feature is “Snap”, which allows you to run multiple applications at once on the same screen, something rarely seen on Tablets for example. In the video demonstration Jensen Harris Director of Program Management for Windows User Experience is watching a video and simply swipes from the left side of the screen and holds an app in place. His screen now shows two apps running side-by-side. The size of the ‘snapped’ app can even be resized and the app on the right will automatically be adjusted in size accordingly.

The touch keyboard has also been optimized to reduce the amount of reaching towards the centre of the display when typing on a larger screen like a touch-based desktop PC. The new Thumbs layout allows you to split the keyboard to a more ergonomic style separated out on the left and right of the screen. All legacy Apps can be run in the traditional Windows OS mode UI, which will probably be more suited to most desktop and notebook form factors. Networking also integrates seamlessly in the new touch UI allowing for access to other connected drives in just a few taps of the screen. Overall I’m very impressed with what Microsoft have produced here. Windows 8 looks like finally delivering a propriety touch UI that doesn’t feel tacked on or clunky. Whats more some of these navigation and app switching features are truly innovative. The tile UI of Windows Phone 7 has been taken to a new level and is really starting to grow on me. There are still questions surrounding how well a ‘one-size-fits-all’ OS will perform across such a broad spectrum of hardware configurations and devices but this certainly looks like a step in the right direction. Check out the demo video above and let us know what you think of Windows 8 so far.