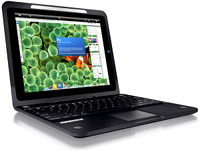 If you’ve been looking for a way to turn your iPad from a Tablet into NetBook then Crux have the solution for you. Its called the Crux Loaded Keyboard Case, which connects directly into your iPad in a manner similar to the Asus Transformer Eee Pad. The clamshell case not only provides some much needed protection for your iPad display but it also comes complete with a full-sized keyboard and trackpad. Whats more the clamshell also contains a battery of its own, which will increase your iPad’s runtime by an additional 7.5 hours. Of course your probably wondering how a trackpad would interface with iOS and it’s mouse cursor-free UI. Well the trackpad is largely a tacked on extra, which will prove cumbersome to use without a cursor but will still allow you to resize images and scroll through web pages and documents if you so wish. 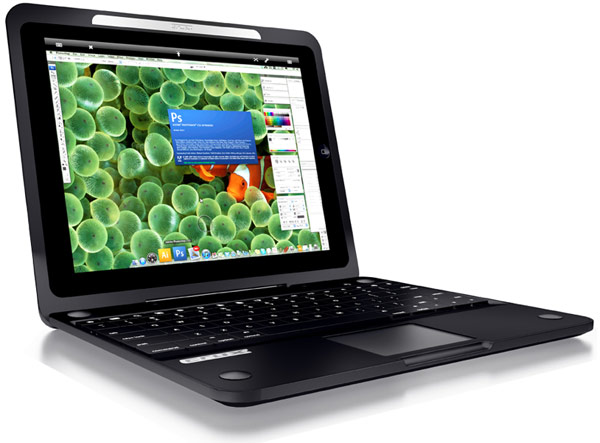 For those looking to turn their iPad into a makeshift Mac NetBook then you can purchase the $30 remote desktop app from the AppStore and control your Mac as seen in the image above. Clearly Crux’ marketing images are trying to appeal to consumers by making them believe that the Loaded Keyboard Case allows their iPad to run OS X natively. This is not so unfortunately. Of course as fun little iPad accessories go its not without a catch, specifically the price. At $249 its an expensive luxury peripheral that suddenly becomes difficult to justify it’s existence no matter how appealing the extra battery life may seem. The expense becomes further underlined when compared to Apple’s own Smart Covers ($69) and Keyboard Dock (Also $69). Admittedly neither of these will provide you with the full NetBook-like clamshell protection of Crux’ Loaded Keyboard Case, nor will they provide the additional battery life but at $110 cheaper, for some consumers they will be a no brainer. Nevertheless for those of you still curious about this pricey but nifty little accessory you’ll have to wait till Autumn for it’s official release.