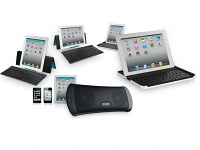 Logitech have released a range of new iPad centric accessories. First up is the Logitech Tablet Keyboard for iPad. It connects seamlessly to your iPad, iPhone or iPod Touch via Bluetooth but what makes the device all the more convenient is that it’s accompanying carry case also doubles as a sturdy stand to rest your iPad in an upright position. This is also fully adjustable to the right angle. The keyboard also offers media controls such as play, pause, volume up and volume down. The Logitech Keyboard or iPad is available now for $69. Next up is the Keyboard Case for iPad 2 developed by ZAGG. Described as an award-winning protective case design it’ll provide an extra measure of convenience and style. It basically functions as a front cover for the iPad 2’s display while also allowing you to slide the Tablet upright via a recess behind the attached keyboard. The Bluetooth keyboard can be kept in a docked position or removed to work externally and its chargeable through USB so theres not need to worry about replacing batteries. The edges of the cover case are lined with high-density padding to help cushion and protect the iPad 2 from knocks and drops. The Logitech Keyboard Case for iPad 2 will set you back $99.

Finally your iPad accessory haul is complete with the new Logitech Wireless Speaker for iPad. Described as a rechargeable Bluetooth Speaker that gives you rich, full stereo sound from your iPad no strings attached. Compatible with your iPhone and iPod Touch also, it will provide wireless audio for a range of up to 50 feet (15 meters). It also comes complete with a handy travel case and a 3.5mm aux stereo jack for use with any music player so the speakers aren’t restricted to just the iPad. The Logitech Wireless Speaker for iPad will provide you with 10 hours of runtime on a fully charged battery and is priced at $99. 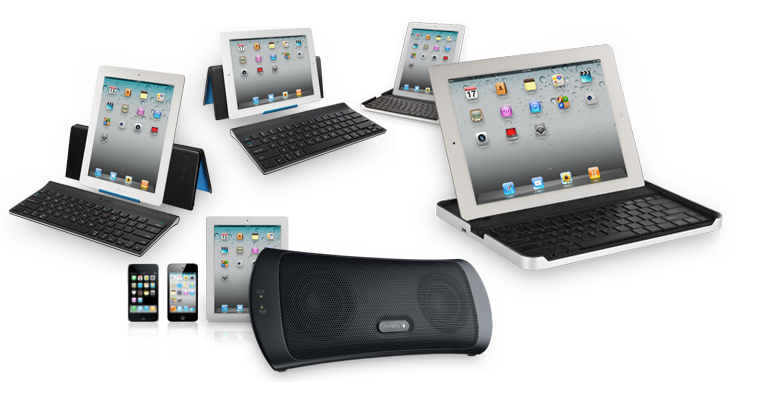