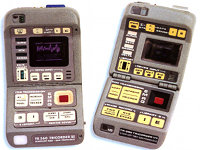 The X-Prize Foundation, a non-profit organization that manages public competitions for the encouragement of technological advancement are back again. Their first venture was the Ansari X-Prize, which was a competition to create a private spaceflight vehicle. Now their latest challenge sees them team up with American wireless telecommunications research and development company, Qualcomm for the $10 million Tricorder X-Prize. The Tricorder is a well known fictional handheld scientific analysis device from the Television series Star Trek. A medical equivalent also featured and was used to diagnose patients by simply placing the Tricorder next to them and deciphering the onscreen data. It is this medical version that the X-Prize wishes to make a reality.

Contestants must design a successful and working version of the iconic handheld medical tool and the winner will walk away with $10 million. The Tricorder X-Prize is expected to launch sometime in 2012 with various Research Institutes around the world already hard at work on the project. The device is expected to “diagnose patients better than or equal to a panel of board certified physicians”. Rod Roddenberry Jr, son of legendary Star Trek Creator Gene Roddenberry said “It is great to see two amazing organizations — the X PRIZE Foundation and Qualcomm — bring the technology of Star Trek to life and make the Tricorder a reality for people everywhere.” Breakthroughs in smartphone SoC technology are expected to play a big part in the development of the X-Prize Tricorder. Perhaps in the future all smartphones will be able to make use of this medical analysis tool via a downloadable App?