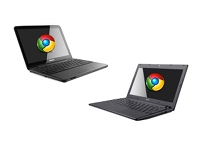 Well it had to happen eventually. At Google I/O 2011 the company finally introduced two new Chromebook laptops from Acer and Samsung. Google markets them as a new kind of computer unlike anything seen before. They boot into Chrome OS in seconds. Theres no needs for updates, theres no viruses and your desktop is saved into the cloud meaning that effectively the computer itself is almost like a dumb terminal that connects to the Web in order to access all of your files. All of the applications are stored in the cloud. The first Chromebook announced is from Acer, which features an 11.6-inch HD Widescreen LED-backlit LCD display, Intel Atom N570 CPU, 16GB SDD, 2 USB ports, webcam and 6 hours of battery life, Built in dual-band Wi-Fi and World-mode 3G (optional), 4-in-1 memory card slot, Oversize fully-clickable trackpad. It will be available to order on June 15th for $349.

The second Chromebook is the Samsung Series 5, which is super slim at just .79 inches thick. The specs include a 12.1-inch 1280 x 800 display, 8.5 hours of battery runtime with an Intel Atom 1.66GHz dual-core CPU. Built in dual-band Wi-Fi and World-mode 3G (optional), HD Webcam with noise canceling microphone the remaining specs are the same as the Acer Chromebook. The Samsung 5 Series will set you back $429 for the Wi-fi only version and $499 for the worldwide 3G edition.

I’ve made no secret of my skepticism of this kind of full bore cloud computing. Not only does it dumb down the technology industry with subpar spec computers it could cause a period of stagnation for hardware development. Another major issue would be what happens when you are out of Wi-Fi or 3G coverage? The computer becomes useless and Windows programs cannot be loaded onto these devices. Yes its true that you can login to any Chrome OS computer around the world and access your desktop session in a guest mode. So effectively your computer can follow you wherever you go. But theres a price to pay for this convenience. The biggest issue for me, which many consumers are simply not aware of is privacy. Right now the government can request records of emails from Google’s Gmail service. They are legally bound to hand over your account details. With this new Chrome cloud computing OS, Google can be audited and hit with a subpoena for whatever reason and now they won’t be handing over just your emails but your photos, videos, files and documents, applications etc. We are already aware that Facebook basically own your photos when you upload them. You enter into an agreement to license them copyright of the images. Google Chrome OS appears to have the potential to be the same thing. Finally in my view considering this OS is supposedly free why are these two new Chromebooks the same price as any other run-of-the-mill NetBook of the same specs? Shouldn’t they be a little cheaper?

Click on the video box below to play Google’s Chomebook promo video.