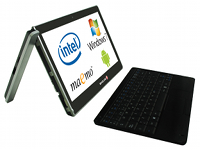 Taking the convertible Tablet concept one step further is Evolve Three with their new Maestro C Tablet PC. Its designed first and foremost as a tablet PC but can be transformed into a Netbook in a few second thanks to it’s unique design approach. It comes complete with an optional wireless magnetic keyboard that attaches to the front of the Tablet’s touch screen. This acts as a hardshell cover for protection as well as an easy way to store the keyboard itself. When removed it works via bluetooth so you can type more effectively. Whats more the display contains a kickstand that allows you to prop the tablet up on it’s side, which is perfect for watching Movies while resting the device on a table but in this instance it eloquently turns the tablet into a more recognizable Netbook PC. 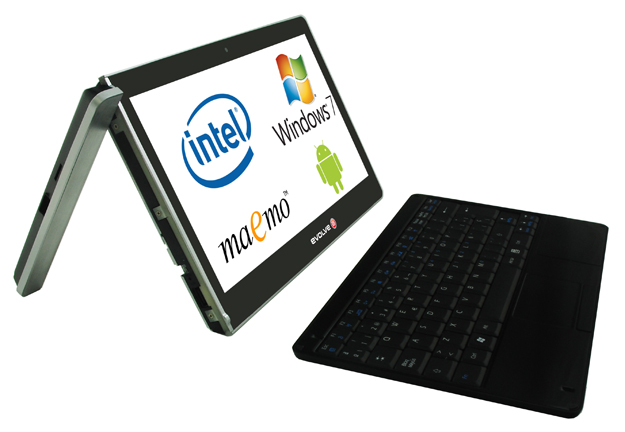 The kickstand also slides back to reveal a whole host of I/O ports like USB etc. The specs for the Maestro C include a 10.1-Inch capacitive multi-touch display, running an Intel Atom Z670 CPU, thats Oak Trail. It also features 2GB of DDR2 RAM, 64B of flash storage, a 1.3 MP camera in the front, HDMI output, Wi-Fi 802.11n, Bluetooth, 3G and it runs Windows 7 Home Premium although MeeGO and Android 3.0 Honeycomb are also optional. It comes complete with 10 hours of battery life. As you would expect given the hardware specs and unique design this is one Tablet that won’t be cheap, prices start from $729 and that doesn’t include the keyboard. Overall the Maestro C offers very solid power under the hood given that it is designed as a luxury consumer Tablet but in my view the only people this will likely appeal to are business users looking for a modern Windows Tablet. Windows 7 is a great OS in desktop-point-and-click form but when its transferred to Tablet form factor and given a touchscreen interface it becomes clunky and cumbersome, which is why so many Windows Tablets have failed in the past. In other words, this is a niche market device. Personally for everyone else out there looking for a convertible Tablet / Netbook setup I think it would make more sense financially and from a usability point of view to buy either a Galaxy Tab or an iPad. Then all you have to do is pick up a wireless keyboard and a case or cover that allows you to prop the device up at an angle and you’ve got yourself a makeshift Tablet PC transformer, albeit without Windows.

Click on the Video below for a detailed hands on demonstration: